Are You Safer Not To Believe? 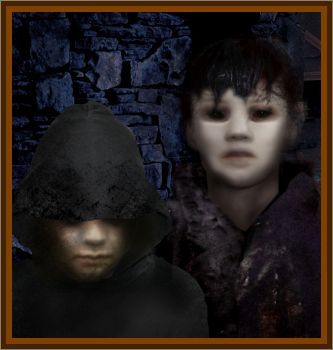 Last night was like any other night, I was switching between listening to music and watching youtube videos with one headphone in so I can hear my infant daughter if she cries, that way my wife can get a full nights sleep, she works at 4:00 a.m. at the hospital every day. When I decided to go lay down in the spare bed in the babies room.

Just as I dozed off I heard a thumping coming from the front porch, startled at first I open my eyes wide and scan the room. Realizing it was most likely my cat scratching himself on the front porch I dozed back off. Then again, the thumping. Damned Cat! I got out of bed to run him off the porch only to see he wasn’t there any more, now that I was up again I wasn’t the least bit tired. I figured I’ll just get some tea and check Facebook while I’m up, maybe finish the web series I was watching on youtube.

A few minutes into the video I felt the sudden urge to look up at the kitchen window, there they were...

The tops of two short statured peoples heads cresting the stairs just above my window frame. The people were just short enough to not see in the window but I could see out. I heard no footsteps on my porch as my stomach turned, but the knock, the knock was a steady hollow thump. The very same thump I had just blamed on my cat. Deciding it was best not to answer I shut my laptop and crept by the door back to the babies room.

I assumed it was some of the people from the low income housing across the road from me that were high or hiding from the cops or maybe looking for my cousin who stays with me often and has many friends over there. The last thing I needed was to try to explain to two stoners that I was trying to sleep even though it was 2:00 a.m.

It wasn’t until I got to my daughters room that the creepiness set in. The thump had moved from the kitchen to the bedroom windows, both windows, a room apart thumping in perfect time. These stoners were going to wake up my daughter if I didn’t run them off now. Pissed off I went out to the kitchen, unlocked and opened the door ready to run around to the side of the house and kick some little idiots ass.

It happened then, standing there looking up at me were two 10 or 11 year old boys. The feeling of dread and the smell of mold almost made me vomit, the smaller of the two then spoke:

May we use your telegraph?

Huh? I just stared blankly at these boys, horrified of what I then realized... their eyes were pitch black.

He asked again to use my TELEGRAPH.

There wasn’t a sound to be heard no crickets chirping, no dogs barking, no cars driving by... nothing. I tried to play it cool and ignore the fact that he didn’t say telephone, or phone, or cell, anything that would have made any sense of the situation and calmly replied:

I don’t have service at my house sorry.

The expressions on their faces turned to rage as I finished my sentence. Swiftly I shut the door and locked it as quickly as I could, then stumbled back to protect my daughter. I picked her up from her crib and held her close, the fact that she didn’t wake up freaked me out the most but I managed to gather my senses enough to make sure she was still breathing and warm, everything seemed okay with her.

The thumping on the windows was back, I dropped to the floor as close to the wall as I could and held my little girl in my arms and wept like a child. I felt helpless and afraid. I lied there for what felt like hours and hours crying and shaking until I heard it, my wifes alarm clock. The thumping stopped the instant the alarm went off and I crept into the master bedroom with the baby.

Whats wrong with you? My wife asked.

I just had a bad dream Is all I could mutter out.

Okay well give me the baby so I can feed her before work.

I handed my wife the baby and she fed her like any normal day. I turned on every light in the house and made coffee for her. For some reason just having her awake calmed my nerves enough to pretend like nothing happened. I walked her out to the car nervously with the baby in my arms. I asked her not to leave until I walked back in the house. She was put off by the request but did so to humor me. Once I was safely in the house I locked the door again. and in the house I sat horrified until she got home. I insisted we go to the next town over and stay the weekend at my brothers house… and here I sit horrified while she sleeps in the guest room with my daughter.

Wondering why they stopped when the alarm went off, I think I know the answer. I was aware of BEKs she wasn’t. Every story I’ve read about them is from someone who already knew about them. Maybe, Just maybe knowledge of them existing is the only reason they visit?