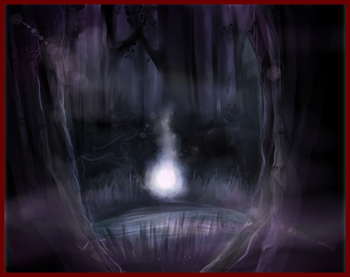 In modern science, it is generally accepted that Will-o'-the-wisp phenomena, ignis fatuus, are caused by the oxidation of phosphine, PH3, diphosphane, P2H4, and methane, CH4.

These compounds, produced by organic decay, can cause photon emissions. Since phosphine and diphosphane mixtures spontaneously ignite on contact with the oxygen in air, only small quantities of it would be needed to ignite the much more abundant methane to create ephemeral fires.

Furthermore, phosphine produces phosphorus pentoxide as a by product, which forms phosphoric acid upon contact with water vapor, which can explain viscous moisture sometimes described as accompanying ignis fatuus.

The idea of the will-o'-the-wisp phenomena being caused by natural gases can be found as early as 1596, as mentioned in the book Of Ghostes and Spirites, Walking by Night, And of Straunge Noyses, Crackes, and Sundrie forewarnings, which commonly happen before the death of men, Great Slaughters, and alterations of Kingdomes, by Ludwig Lavater, in the chapter titled That many naturall things are taken to be ghoasts.

Many times candles & small fires appeare in the night, and seeme to run up and down. Sometime these fires go alone in the night season, and put such as see them, as they travel by night, in great fear.

But these things, and many such like have their natural causes.

Natural Philosophers write, that thick exhilations arise out of the Earth, and are kindled. Mines full of sulphur and brimstone, if the air enters unto it, as it lays in the holes and veins of the Earth, will kindle on fire, and strive to get out.

In 1776, Alessandro Volta first proposed that natural electrical phenomena, like lightning, interacting with methane marsh gas may be the cause of ignis fatuus. This was supported by the British polymath Joseph Priestley in his series of works Experiments and Observations on Different Kinds of Air, 1772 to 1790, and by the French physicist Pierre Bertholon de Saint-Lazare in De l’électricité des météores, 1787.

Early critics of the marsh gas hypothesis often dismissed it on various grounds including the unlikeliness of spontaneous combustion, the absence of warmth in some observed ignis fatuus, the odd behavior of ignis fatuus receding upon being approached, and the differing accounts of ball lightning, which was also classified as a kind of ignis fatuus.

This is a name that is sometimes applied to a phenomenon perhaps more frequently called Jack-o'-the-Lantern, or Will-o'-the-Wisp.

It seems to be a ball of fire, varying in size from that of a candle flame to that of a man's head. It is generally observed in damp, marshy places, moving to and fro, but it has been known to stand perfectly still and send off scintillations.

As you approach it, it will move on, keeping just beyond your reach, if you retire, it will follow you.

That these fireballs do occur, and that they will repeat your motion, seems to be established, but no satisfactory explanation has yet been offered that I have heard. Those who are less superstitious say that it is the ignition of the gases rising from the marsh. But how a light produced from burning gas could have the form described and move as described, advancing as you advance, receding as you recede, and at other times remaining stationary, without having any visible connection with the Earth, is not clear to me.

However, the apparent retreat of ignis fatuus upon being approached might be explained simply by the agitation of the air by nearby moving objects, causing the gases to disperse. This was observed in the very detailed accounts of several close interactions with ignis fatuus published earlier in 1832 by Major Louis Blesson after a series of experiments in various localities where they were known to occur.

Of note is his first encounter with ignis fatuus in a marshland between a deep valley in the forest of Gorbitz, Newmark, Germany. Blesson observed that the water was covered by an iridescent film, and during day time, bubbles could be observed rising abundantly from certain areas.

At night, Blesson observed bluish purple flames in the same areas and concluded that it was connected to the rising gas. He spent several days investigating the phenomenon, finding to his dismay that the flames retreated every time he tried to approach them. He eventually succeeded and was able to confirm that the lights were caused by ignited gas.

On visiting the spot at night, the sensitive flames retired as the major advanced, but on standing quite still, they returned, and he tried to light a piece of paper at them, but the current of air produced by his breath kept them at too great a distance.

On turning away his head, and screening his breath, he succeeded in setting fire to the paper. He was also able to extinguish the flame by driving it before him to a part of the ground where no gas was produced, then applying a flame to the place whence the gas issued, a kind of explosion was heard over 8 or 9 square feet of the marsh, a red light was seen, which faded to a blue flame about 3' high and this continued to burn with an unsteady motion.

As the morning dawned the flames became pale and they seemed to approach nearer and nearer to the Earth, until at last they faded from sight.

Blesson also observed differences in the color and heat of the flames in different marshes. The ignis fatuus in Malapane, Upper Silesia, now Ozimek, Poland, could be ignited and extinguished, but were unable to burn pieces of paper or wood shavings. Similarly, the ignis fatuus in another forest in Poland coated pieces of paper and wood shavings with an oily viscous fluid instead of burning them.

One attempt to replicate ignis fatuus under laboratory conditions was in 1980 by British geologist Alan A. Mills of Leicester University. Though he did succeed in creating a cool glowing cloud by mixing crude phosphine and natural gas, the color of the light was green and it produced copious amounts of acrid smoke.

This was contrary to most eyewitness accounts of ignis fatuus. As an alternative, Mills proposed in 2000 that ignis fatuus may instead be cold flames. These are luminescent precombustion halos that occur when various compounds are heated to just below ignition point.

A related hypothesis involves the natural chemiluminescence of phosphine.

They successfully created a faint cool light by mixing phosphine with air and nitrogen. Though the glow was still greenish in color, Garlaschelli and Boschetti noted that under low light conditions, the human eye cannot easily distinguish between colors. Furthermore, by adjusting the concentrations of the gases and the environmental conditions, temperature, humidity, etc., it was possible to eliminate the smoke and smell, or at least render it to undetectable levels.

Garlaschelli and Boschetti also agreed with Mills that cold flames may also be a plausible explanation for other instances of ignis fatuus.

In 1993, professors Derr and Persinger proposed that some ignis fatuus may be geologic in origin, piezoelectrically generated under tectonic strain. The strains that move faults would also heat up the rocks, vaporizing the water in them. Rock or soil containing something piezoelectric, like quartz, silicon, or arsenic, may also produce electricity, channeled up to the surface through the soil via a column of vaporized water, there somehow appearing as Earth Lights.

This would explain why the lights appear electrical, erratic, or even intelligent in their behavior.

The will-o'-the-wisp phenomena may occur due to the bioluminescence of various forest dwelling micro organisms and insects.

The eerie glow emitted from certain fungal species, such as the honey fungus, during chemical reactions to form white rot could be mistaken for the mysterious will-o'-the-wisp or foxfire lights.

There are many other bioluminescent organisms that could create the illusions of fairy lights, such as fireflies. Light reflecting off larger forest dwelling creatures could explain the phenomenon of will-o'-the-wisp moving and reacting to other lights.

The white plumage of Barn Owls may reflect enough light from the moon to appear as a will-o'-the-wisp; hence the possibility of the lights moving, reacting to other lights.

The decline is believed to be the result of the draining and reclamation of swamplands in recent centuries, such as the formerly vast Fenlands of eastern England which have now been converted to farmlands.