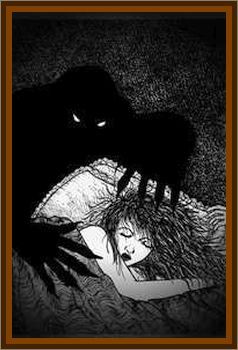 When I was younger I lived in a ranch style home with my mom and grandma.

My mom and I had chose to have our rooms in the basement, her's in the back corner bedroom of the basement and mine in a sectioned off area of the main living room/recreational area.

One night in particular I remember playing with my legos, I was probably 9 or 10, when I happened to look up at my mom's bedroom door. As I looked through that door it became more and more apparent that there was something there.

It had no facial features and was nothing more than the silhouette of a small person with really swooshy hair.

After about a minute of looking at this shadow, it dashed into the bathroom via the door directly connecting the bathroom and bedroom.

In disbelief I continued playing with my legos, when I felt something staring at me. As I looked up I couldn't believe my eyes, the same shadow was now standing directly in the bathroom doorway.

Now I know it had no face, much less eyes, but it was staring, watching, perhaps even waiting. It almost immediately sprinted into my mom's room, at which point I sprinted up the stairs tears of fear running down my face.

After that incident I could never be alone in that basement at night, and my bedroom was moved to one of the spare rooms upstairs. I wish I could say that was the last of my experiences, but alas it is not. This same shadow person followed me to several different houses, including the one I'm in now.