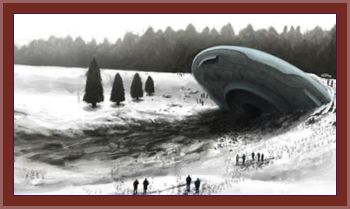 Numerous associates of the Pentagon program, with high security clearances and decades of involvement with official UFO investigations, said they were convinced such crashes have occurred, based on their access to classified information.

It seems there has always been a consensus in the American public that the U.S. Congress has been in the dark regarding UAP crash retrievals if they existed. It would be unconscionable to believe that if elected officials had information about, or physical evidence of off world vehicles, that were in the possession of the United States Government, USG, this knowledge would not be concealed from the American public, at least on an unclassified level.

Primarily, the American public and its allies have a right to expect a level of transparency and clarity from the USG when the question of whether we are alone in the universe is at hand. The technical specifics and workings of any exotic materials or advanced technology are understood to be a matter of national security as it pertains to military concerns and requires secrecy.

However, as stated by several notables, information is typically classified to protect the sources and methods, how it was collected, who collects it, and omitting, as is necessary in this case, the technical specifications of vastly superior technology.

As reported in a letter to Congress from the Director of National Intelligence, DNI, Avril Haines said that over classification of government secrets both undermines national security by blocking the intelligence community’s ability to share critical information and erodes the basic trust that our citizens have in their government.

Simply put, information the public needs to know can be presented in an unclassified format to keep Americans well informed and protect National Security concerns.

Dr. Eric W. Davis, Ph.D. is an Astrophysicist, University of Arizona, with a background in Quantum Field Theory and Relativity, Consultant to U.S. Air Force Research Laboratory, AFRL, Department of Defense, DoD, Department of Energy, DoE, NASA, and Senior Science Advisor at the Institute for Advanced Studies in Austin.

In an interview Dr. Eric W. Davis, who described an ongoing USG UFO Program that is studying off world vehicles of which he is a part.

Davis, who has been described as an unapologetic truth teller by several notables, spills the beans in an unstoppable deluge of information regarding UAP crash retrievals and their difficulties understanding exotic materials.

In the interview, Davis states that all of the global superpowers have retrieved their share of UAP crashes which they are currently attempting to reverse engineer, further indicating that some of these vehicles had occupants operating these craft.

According to Davis, only a minute fraction of USG is aware these programs exist, and the scientific effort needed to crack this technology is likely wholly under staffed.

Additionally, the scientific process also suffers from encapsulation, in a stove piped, compartmentalized effort impeding the ability to share information between scientific disciplines in the program, and severely hampering their ability to collaborate in the understanding of retrieved exotic materials.

Davis also stated the current crash retrieval program is very small and poorly funded, has been in operation for decades, and at one point was shut down in 1989 due to a lack of progress in reverse engineering retrieved exotic assets.

In the necessity to understand this technology the programs are periodically resurrected as new funding for this black project becomes available so the research can continue.

Black programs focused on UAP are likely classified as Waived Unacknowledged Special Access Programs, WUSAP, which supposedly have oversight from the Gang of Eight which is briefed on classified intelligence matters by the executive branch, and includes the leaders of each of the 2 parties from both the Senate and House of Representatives the chairs, and ranking minority members of both the Senate Committee and House Committee for intelligence.

The idea that Congress knows and is funding UAP projects or the possibility that they don’t know, is equally concerning, either way, the implications are astounding.

Additionally, concerns from documented nuclear weapon facilities incidents where warhead navigation systems were being shut down by UAP on multiple occasions, provided the additional motivation to gauge our ability to replicate exotic technologies by 2050.

Additionally, and according to Davis, there was a documented incident on the Brazilian island of Colares where alleged UAP aggression towards its populace, killed some individuals and is a possible indication that at least some UAP entities may be malevolent.

On September 20th, 2019 the Aerospace Corporation would be awarded a U.S. Air Force contract for $1.08 Billion to provide space support services for the United States Government.

One month later on October 23rd, 2019, Davis would become a focal point in a New York Times article indicating he had briefed Congressional intelligence committees on retrievals of unexplained objects. Davis was employed by Earth Tech, headed by Dr. Harold Puthoff at the time of this briefing.

Davis would resign his position at Earth Tech in November of 2019 and take a new position with the Aerospace Corporation in December 2019, shortly before he provided a classified briefing to an unknown Department of Defense Agency in March of 2020, about off world vehicles not made on this Earth.

Then in a strange twist of fate, and possibly unrelated news, on March 23rd, 2020 Bigelow Aerospace laid off its entire workforce and ceased all operations.

No Longer in Shadows, Pentagon’s U.F.O. Unit Will Make Some Findings Public

The article reported that Dr. Eric W. Davis provided a classified briefing to a defense department agency as recently as March about retrievals from off world vehicles not made on this Earth.

On July 28th, 2020, Blumenthal and Kean followed up with another article entitled:

Do We Believe in UFOs? That’s the Wrong Question

Numerous associates of the Pentagon program, with high security clearances and decades of involvement with official UFO investigations, told us they were convinced such crashes have occurred, based on their access to classified information. But the retrieved materials themselves, and any data about them, are completely off limits to anyone without clearances and a need to know.

Nearly a year later, Ralph Blumenthal appeared on Jimmy Church’s Fade to Black, and explained why the quote from Davis was included in the article, No Longer in Shadows, Pentagon’s UFO Unit Will Make Some Findings Public, and said:

In an interview in April of 2021, Christopher Mellon was asked:

Do you believe there are objects in our possession, broadly defined, that are from something other than this Earth?

Melon continued...Curiously president Trump himself indicated on air while being filmed, that he did have classified information about Roswell, which is as most people know is the legendary site of the alleged crash of a UFO. And when asked by his son about declassifying this information he said:

I’ll have to think about it.

Shortly after this interview, Mellon appeared on The Joe Rogan Show, and was asked about the Roswell incident and said:

I’ve been told by multiple people who have credentials and access that there is some truth to these stories, and I don’t discount this.

In a largely overlooked article, Glowing Auras and Black Money, The Pentagon’s Mysterious UFO Program, it was reported that Congressional appropriations for $22M had been awarded to Bigelow Aerospace with the money used for management of the program, research, and assessments of the threat posed by the objects.

However, reading further into the article they reported:

Under Mr. Bigelow’s direction, the company modified buildings in Las Vegas for the storage of metal alloys and other materials that Mr. Elizondo and program contractors said had been recovered from unidentified aerial phenomena. Researchers also studied people who said they had experienced physical effects from encounters with the objects and examined them for any physiological changes. In addition, researchers spoke to military service members who had reported sightings of strange craft.

The articles continued with this quip from Dr. Harold Puthoff, director of Earth Tech which Davis worked for between November 2004 and November 2019 as its Chief Science Advisor, and Puthoff said:

We’re sort of in the position of what would happen if you gave Leonardo da Vinci a garage door opener, an engineer who has conducted research on extrasensory perception for the C.I.A. and later worked as a contractor for the program, said Harold E. Puthoff,

First of all, he’d try to figure out what is this plastic stuff. He wouldn’t know anything about the electromagnetic signals involved or its function.

Over the last 4 years, Lue Elizondo has appeared on numerous podcasts and mainstream media interviews and has limited his comments regarding Dr. Davis to his admiration for his scientific expertise and inability to tell a lie regarding his research.

What it is, ain’t exactly clear.

Dr. Davis’s admissions in the interview are nothing short of astounding, and rather perplexing. The information that he provided would be highly classified if true, and would undoubtedly put his security clearance in jeopardy.

The question becomes, why would Davis risk losing his security clearance and his ability to continue working on a UFO program by making this startling omission to the public?

The U.S. Government’s 9/11 Commission Report concluded that its inability to share critical information between government agencies contributed to the intelligence failure associated with the horrific events of 9/11.

The fact that Davis has been able to maintain his security clearance and was hired by Aerospace Corporation after the interview raises additional questions.

One could argue that everything that was said in the interview was a complete fabrication.

However, then the question becomes, why would you purposely try to destroy your career by lying about a program that never existed, risk your security clearance and bringing your character and sanity into question, unless you were told to.

Davis has worked on the AAWSAP, AATIP, and UAPTF programs among many other government related projects for decades.

Rigorous requirements associated with articles published require extensive vetting which has to be on the record, and proving to the editor’s satisfaction that classified briefings with the DOD agency and Congressional committees took place.

Also bearing in mind Congressional Committee staff members did not respond to requests for comment on the issue, why not?

Additionally, Davis continues to receive endorsements and acknowledgments from former government officials within the Department of Defense intelligence and DOD/DIA/CIA intelligence agency employees and former directors who have credentials and access, and maintain active security clearances of their own.