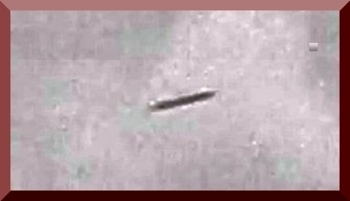 My name is Hilda Owen, housewife. My husband is a policeman.

On the evening of February 12, 1977, I was looking out of my kitchen window when I saw a cigar shaped object with a domed top that appeared to be drifting silently in and out of the clouds.

I drew it in lipstick on the windowpane.

It was a very extraordinary sight and difficult to explain.

The UFO seemed to appear out of a tongue of flame over Aberffraw Common.

At first I thought an aircraft was on fire, but within seconds the flame appeared to form a circle and the domed shape appeared within it.

There was no mistaking the shape.

It was a craft of some kind, because I could clearly see portholes.

It was the color of the setting Sun and about twice the Size of the sun as we see it.

The shape was still in the sky when my husband arrived home just after midnight but when he went to fetch his binoculars it just vanished.