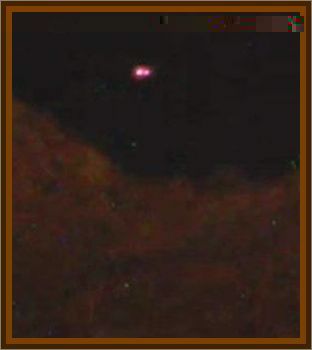 Hi there, my name is John I was on a camping trip with a friend of mine recently in Stampede pass Washington. We were camping on the side of a highly remote mountain when we decided to go for a little night hike to view some stars. Upon reaching the top of the mountain, we laid down and stargazed for what seemed like 30 minutes, as when I looked at the time it was 2:30 a.m.

We noticed one of the stars we were viewing just up and took off which was quite odd to my companion and I, then to our surprise an extremely large red orange object lit up the sky in front of us. The orb was above the mountain peaks but hovering quite low for how large it seemed, I took out my iPhone and snapped a few photos before my phone died randomly. We were so frightened by this massive hovering light that we retreated to our campsite and had a very sleepless night, thinking we were about to be abducted by some horrible alien craft.

This was probably the most scared I’ve ever been in the woods as I regularly camp, hunt, fish, and do other recreation in the far reaches of the wilderness.