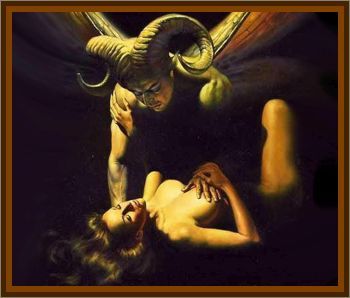 At night, I'd be awakened by an enormous pressure on my chest, as if someone was pinning me down and I couldn't get away. I could only feel this pressure on my upper body, chest & neck. I would wrestle this thing away. I was usually too afraid to open my eyes. To me, something real was in the room with me and it was holding me down and silencing me. I recall watching shows about exorcisms and the priests would say, This is a child of God, and you cannot hurt her. I would try to utter these words, but felt that all I could produce was a guttural sound. These events took place in Yorkton, my home town. And went on for several years, I'd guess 3-4 times per year.

In 1986, shortly after returning from a trip to the Caribbean, back in Yorkton, I had another of these visits. By then I was trying to pay closer attention to what was happening during these incidents, I recall running my hands over it and I could feel that this thing had a head. All I can remember about the head was it felt like it had a very close crop of hair and was the size of an infants head, say someone who was between 6 & 9 months old. I don't recall if it had any temperature at all, it certainly wasn't cold. The temperature was probably more inanimate, just felt like an object at room temp that wasn't producing any body heat of its own.

In approximately 1987 or 1988, I saw an Oprah Winfrey show dealing with strange occurrences and someone was describing exactly what I had been experiencing. The psychologist on the show called them Incubus Attacks, and said they were strictly psychological and the individual was wrestling with something from his/her past. This struggle with past issues would manifest itself into these night-time attacks. I truly did not believe this was all in my head. Seemed very real to me. I had a happy, well-adjusted childhood and couldn't think of anything psychological that would come back to torment me.

In 1989 I began a relationship with a man that would last the next 13 years. As I started spending more nights with him, I told him about these experiences. There was one time early in our relationship that he said I had been restless through the night and he wondered if it was one of those episodes. He woke me up immediately but I had no recall. That fall, I began teaching in a town called Kindersley. After my staff Christmas party in 1989, this man stayed over at my place. As I still had to teach the next day, I got up and went to the school and left him sleeping at my place. When I returned, he said my friend had paid him a visit that morning while he was sleeping alone at my place. He described it exactly as I experienced it, except his reaction was more of anger, like how dare you? Whereas mine was more of fear.

We had several years without any further incidents to either of us. In approximately 1997 (?) we were living in Prince Albert. My ex had been sleeping downstairs. He was a shift worker so that wasn't uncommon. It was a Saturday evening around 10:00 p.m. and I was starting to get ready for bed. It was winter, very dark outside and very cold. I heard a small child run up the stairs on my deck. It was how kids run, very heavy-footed and sounded like the kid had heavy soled shoes. I thought it was very odd for the neighbors kid(s) to be out so late and so cold. Anyhow, I peeked out onto the deck and saw nothing. Nobody there, no fresh tracks in the snow. But I know what I heard. I went back to the bedroom, directly above the room where my ex was sleeping. I heard him call out from downstairs. I listened, but it sounded like he went back to sleep. Then I heard him get up, go to the bathroom downstairs, and back into the bedroom downstairs. Next thing I knew, he was upstairs and quite shaken. He said that he had been visited by our friend that night. When I heard him call out was when he was wrestling with this beast. He said when he opened his eyes, the room was full of shooting, darting lights, he saw a form floating above him. It was just a dark shadow of a head and shoulders. That, combined with the kid-like sounds running up the stairs had me thinking we were dealing with a poltergeist. When he went back into the room ( dumb guy ) after being in the bathroom, he said it was ice cold. That's when he came upstairs. I remember telling him that I believe something paranormal had happened, because I had heard it run up the outside stairs just prior.

To me that was the first validation that this stuff was not just occurring in our heads, we both experienced something that night, that we couldn't explain.

And I was fully awake at the time.

That's the end of this story. I haven't had any of these experiences in a long time. I'm not sure if they continue to bother my ex. To me, I will never believe it was just in my head. I do think something was after me and later took after my ex. The more I learn/watch about hauntings, particularly demonic, is that they target those who are weak, sick or basically easy targets. I'm not sure what might have attracted such a force to me in the first place, but I could see that it would have concluded my ex was a much easier target. He had a lot of issues, struggled with depression, I'm sure so it would have been easier to get control over him.