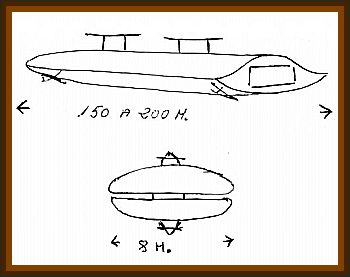 A pocketbook salesman, Adrian Sanchez Sanchez, also got a fright, and this is how he described his experience in the vicinity of the township of Castillo de las Guardas, Province of Seville, in a letter to Sr. Guerard:

On March 20, between 11:00 a.m. and 11:15 a.m., as I was making the rounds of my customers, I saw an object fall from the sky. I couldn’t tell what it was but thought that it might be an aeroplane crashing to the ground. I ran to help the possible victims and found an airship of gigantic proportions, which I calculate to have measured about 500' long.

I was surprised but not frightened and did not realize at that moment what I had actually seen. I noticed how a large door opened in the tail end of the ship and how a formation of 3 smaller ships, in the shape of yo yos, approximately 25' long, proceeded to enter the larger one, but the last one turned and came slowly towards me.

At this, I turned on my heels and ran quickly to my car and drove off, and was followed by this smaller ship, at intervals, for a distance of 10 miles.

It then disappeared at an extremely high speed without making any sound at all.

These ships were of a color that looked like aluminium, gave off no lights or noises, and this is about all I can tell you, except that, just seeing it quickly and under these conditions, I did not notice anything that appeared to be windows or openings that might serve as doors.

Sr. Guerard points out that the witness reported the incident to the Guardia Civil, and no man with a good business reputation and a family would dare make fools of this branch of the Spanish Police.

Truck driver Maximiliano Iglesias Sanchez, 21, was driving to Algunilla when he encountered a blinding white light on the road, at 600' distance, his lights and diesel engine went out. The UFO, now only faintly luminous, was wider than the road, metallic, without visible openings, and standing on three 18" legs. Another object, non luminous and to the right, hovered about 50' above the ground. 2 beings appeared in front of the landed object gesturing with their arms, one went around the side of the object and returned, and then both figures vanished to the right and the object ascended with a humming sound.

The figures were human like, 6' tall, wearing close fitting coverall type garments of metallic hue and they walked and moved normally. The witness was unable to see any facial features. After he passed the site he looked back and saw that one object had relanded on the road.