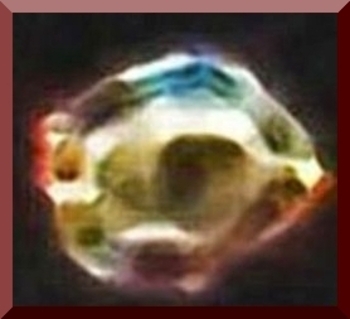 I was living in Colorado Springs. I noticed my neighbors gathering together watching something in the sky, around 9:30 p.m.

I went outside and looked up to see a very large circular spaceship hovering in one place. Someone had a car radio on listening to a station reporting the strange sight we were looking at.

As I watched in awe, I noticed there were red, white & either blue or green lights blinking and rotating all around this craft, I can’t be certain on the blue or green colors after all these years.

It seemed as if they were trying to communicate with us.

Then I noticed 3 other circular objects off in the distance, they were darting back & forth at a high rate of speed, as in the blink of an eye. Everyone around me remarked about what we were watching, no one had seen anything like this before.

This show went on for almost an hour before the 3 smaller spacecraft disappeared. The larger spacecraft left shortly after that. All of them left at a high rate of speed, much faster than anything we had ever seen.

Since there were about a dozen or more people watching this show, and many more listening to the radio, seeing the same thing we did, it had to be newsworthy. I have never seen a report on this UFO sighting.

Hopefully someone else will admit to seeing this awesome sight.