Cennina Landing and Encounter with Humanoids 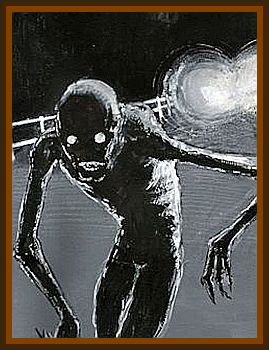 This is a date that marks the occurrence of one of the most extraordinary UFO landing and contact cases ever recorded, it has already been quoted by Vallee as #24 in his Century of Landings.

Cennina is a small town near Biicine, in the Province of Arezzo.

On the morning of that day, a Monday and a feast day in the Catholic Church, Rosa Lotti nei Dainelli, a 40 year old peasant woman mother of 4 children, living at a farm called La Collina which is situated in a lonely region between Cennina and Capannolc, had risen early to go down into Cennina to visit the church and the cemetery. She was carrying a bunch of carnations, destined for the altar of the Madonna Pellegrina, whose procession had taken place the preceding evening.

Rosa Lotti rarely went into town, and spent most of her time on her arduous duties on the farm.

On this feast day morning however, she had put on her new dress and started out along the footpath that leads, through fields and thickets, towards the town. She went barefoot, carrying her stockings and her best shoes so as not to get them dirty. She would put them on before she came to the first houses.

She reached a point on this path, regularly taken by her, where it passed through a thicket of low bushes. She knew this path perfectly. She had even gone along it many a time at night, without ever having any sort of unpleasant encounter or noting anything unusual.

Arriving in the middle of a small clearing among the shrubs and sparse trees, she beheld, near a pine tree and on the edge of the little grassy area, a strange and unwonted object that at once aroused in her both curiosity and surprise. It was a sort of huge spindle, fixed vertically in the ground.

This is how Rosa Lotti subsequently described the strange machine:

A sort of double cone, over 6' high and about 3' wide in the middle.

The object was very swollen out in the middle and pointed at both ends. It seemed to be covered with leather.

The outside of it shone as though it was of very polished light metal. On the lower cone there was an open glass door, and inside it could be seen 2 little seats, little scats like those used by children. In the central part of the spindle, where it was widest, there was a sort of roundish glass, closely following the round shape of the mysterious machine. Rosa Lotti had heard no sound from it.

Rosa Lotti had stopped in her tracks, astonished and curious. But her surprise was only just beginning. From behind the spindle she beheld two strange beings emerge. Almost like men, but of the size of children, was her description.

The little beings approached her with friendly expressions on their faces. She had plenty of time to make a thorough examination of them, so that she was afterwards able to describe them in the minutest details.

About 3' in height, they were wearing a sort of grey overall, all in one piece, including the feet. On their backs they had short cloaks of a grey material, and over the one piece overall they wore a sort of doublet, fastened, right up to the collar, with little buttons, like shining stars. Their trousers were tightly fitting, like the long underpants that our men wear in the winter.

Their faces, crowned by helmets, were normal, but small. Both were no taller than a 5 year old infant, but their bodies were in proportion. It would have taken 2 of those things to make a man, she said, but they were very fine looking, even though rather old.

Vigorous, lively, they were talking away, as though they were Chinese. They kept saying:

They gesticulated, but with no trace of menace. Indeed, on the contrary, in a friendly fashion, as though they were trying to make themselves understood and to strike up a rudimentary conversation.

The older looking of the pair was the more jovial, laughing and obviously trying to establish contact with her. They had magnificent eyes, full of intelligence. Their noses were of normal shape, their mouths just like a man’s, but their upper lips were slightly curled in the center, so that even when they were not laughing their teeth were still exposed. They were teeth like ours, broad, strong teeth, but short, as though they had been filed down, and somewhat protruding, like the teeth of rabbits.

Their ears were hidden under 2 leather disks, and there was a band around their foreheads, also of leather.

Approaching Rosa Lotti, who was now terrified, they snatched out of her hands the bunch of carnations and one of her black stockings.

When she remonstrated timidly, the one who seemed the older of the 2 handed some of the flowers back to her, but kept 5 of them. Then, having examined the structure of the flowers with an air of curiosily, and laughing the while, he wrapped them in the stocking and threw them into the spindle through the small opening.

Then they stepped back a few paces from her, and took 2 packages from inside the machine, white objects, circular, which they carried in the hollow of the arm, holding the arm bent with the hand on the chest. The thing seemed to be wrapped in a newspaper, but it was not a newspaper.

Then they turned towards the lady again, but she had seized the moment to escape. After running about 300', she looked back. Everything had vanished.

The Carabinieri who went there in an effort to investigate the affair found that there was a deep cavity recently made in the ground… The hole was also seen by the Chief Inspector of Carabinieri at Ambra, Signor Zulimo Botarelli, who happened to be out hunting in the vicinity at the time.

Now, 18 years after the event, we have re examined the Cennina case and, thanks to the active support that we have received from the Prato UFO Study Group, we have been able to check the details and also gather valuable pieces of supporting testimony.

A vast network of collateral eyewitness accounts is now available to provide quite particular validity for the Cennina phenomenon, and to cause it to acquire a value, as an eyewitness account, that is well nigh irrefutable.