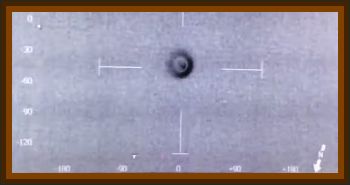 The mysterious footage was filmed by the South Wales police helicopter while they were flying 1,000' over the Bristol Channel. With none of the crew being able to come up with an explanation of what it was, the team tweeted it out with an alien emoji stating:

Some have suggested it could be a balloon or a Chinese lantern, but police have ruled out both ideas because of the heat and movement.

It's difficult to judge the size but we filmed it for just over 7 minutes, the police twitter account stated.

It is understood the footage was captured over Bristol on Saturday, September 17, and shared online by NPAS St. Athan, the National Police Air Service which is based in South Wales, more than a week later.

They explained to their Twitter followers that the footage, which says it was 8:30 p.m., was actually taken about 9:30 p.m. when it was pitch dark.

In February a woman claimed she captured proof of alien life just a few miles away from where the police helicopter was flying.

Fiona Powell was walking her children with friends along the sea front on Severn Beach when she took a photo of the view. But on closer inspection, the corner of one of the photos contained what appeared to be a flying saucer.

The 41 year old said that before the incident she had been slightly dubious about the existence of extra terrestrials, but that this close encounter was now giving her pause for thought.

The photographs were picked up by American UFO fanatics Secure Team 10, and turned in to a YouTube video which has been watched almost 250,000 times.

Chairman of the Cornwall Research Group David Gillham said new technology such as thermal and infrared cameras were leading to more spotting of UFOs than ever before. He said there are hundreds in the South West area every year.

The theory is they, UFOs, are all around all the time but we can't see them. Infrared and thermal cameras allow us to see things that are working in a different light sphere.