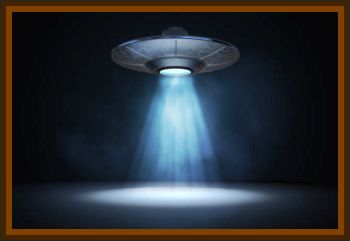 The red and purple lights were more subtle, as if they were just to illuminate the ship to be seen, while the white lights were like the lights on a flashlight or a light bulb, except for the fact that it had no exact beam, but more of just a present light.

As I said earlier, we were all sitting around the table, we had eaten late because my husband was caught in traffic, and we just sat there for a few minutes to wind down.

Just sitting there, we looked out the window and at first, we just saw the light from the UFO cast out over the trees. Our woods had a tree that was maybe 75' to 100' tall, and the UFO couldn’t have been more than 50' above the tree.

It came out over the ridge in our roof, flying low over the trees, and we were all screaming:

Of course, that exact week at my daughter’s birthday party we had run out of film and had not stopped to get more, so there were no pictures.

The UFO looked almost like a circle, with the implication that it was a rounded triangle. It was a little more pointy than a circle, and it was flashing purple/red & white. The red and purple lights seemed to almost make up the ship, while the white lights were kind of like searchlights, except for the fact that there were no exact beams of light, like the ship was made of the light or something.

It was really weird because it looked like it was looking for something in the woods, at least to me. I also think this because of the fact that it seemed to stop and just hover over the big tree in our woods, for a few seconds, and then it continued slowly on.

It went over our neighbors’ woods, and then all the lights turned off just before it disappeared over a ridge of trees to the East.

We were all very excited and scared, but it was exhilarating None of my friends or family believe me, so this is really the first time I’ve gotten to give this story to the public.