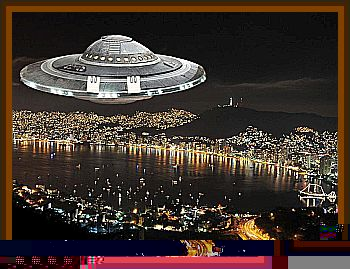 While driving the winding roads that separate Mexico City from Acapulco, Armando Zurbarans' only concern was arriving at the Pacific port city before sunrise, in order to meet a business partner.

At some point during the drive, he was overcome by an almost hypnotic state of lethargy, which caused him to pull over. Not far ahead on the road, he was able to see a number of men clad in overalls with wide belts gathered around a strange, brilliantly lit object.

Before he realized, and having no idea how it happened, he was walking toward the object, escorted by the long haired men.

A slight buzzing sound filled his ears as he entered the saucer. Zurbaran was going down in history as his country’s first contactee.

How about Salvador Villanueva in 1953?, and this was his first question to the ship’s captain:

Why had he been chose for this honor?

You are neither the first nor last Earthman to be chosen for testing, his host replied. Our task, slow though it may seem, is designed to persuade. We choose the likeliest, most malleable persons for contact, so that they might better transmit our messages.

Zurbaran was then treated to a review of the smallest details of his life on a screen within the vehicle’s wall and a tour of the ship’s interior, guided by one of the fair, long haired crewmen, reminiscent of Adamski’s visitors, who answered each of the puzzled human’s questions in detail.

The space travelers, he learned, employed a gravity repulsion system to cover the distance between their home world and Earth, scanning the space ahead of them with a radar like device to dispel any objects that may lie in their path.

Unlike other contactee stories of the time, Zurbaran’s visitors did not claim to originate from any planet in the Solar System, nor did they mention their planet of origin by name. The craft, he learned, had taken off while he was unaware and was now in space. Zurbaran peeked out a porthole, hoping for a glimpse of the world seen from above, but could only see a grayish mist until at a distance of 25,000 miles, the ship’s captain pointed out the planet to him through another porthole.

Excited by the vista, the human asked the captain if he could perhaps be taken to visit their world, but his request was turned down. He was told that perhaps someday such an invitation would be tendered, at the right moment. Zurbaran was able to sleep a normal sleep and eat with the UFO’s crew.

His description of taking a shower in space is particularly memorable:

I shall never be able to forget it. That bathroom was a new and unimaginable experience for me. Standing upright, facing an angle of the wall filled with tiny holes, I was covered in warm air, and as it grew stronger, it became transformed into damp air, impregnating my skin like a warm, wet breeze.

When I was completely drenched, I was offered a sort of liquid soap, which I rubbed all over myself, from head to toe. Standing once more before the warm air sprinklers, I felt the soap begin to evaporate and my skin become completely clean. The air then ceased to be damp, turning dry and warm, instead becoming colder until agreeably cool.

Breakfast in orbit around the planet consisted of fruit juices tasting imperceptibly of mangoes or other tropical fruits. The ship’s captain advised him that to his people, milk was a principal source of nourishment, but that they did not get it from cows but from a mixture of terrestrial and marine plant life.

He was told that the provisions were transported aboard the craft via telepathy. Unknown to Zurbaran, thousands of miles away, in the Pyrenees between Spain and France, Jaime Bordas a resident of the village of Castell, was engaged in a strange experience with a 6' tall, overall wearing humanoid with long blond hair.

The otherworldly being would only drink milk as its sole nourishment. After the meal, the captain proceeded to regale Zurbaran with his world’s philosophy, religion and history, children and the elderly received special consideration, and there was equality between the occupations.

The average life span was 250 years, and collaboration had replaced competition in the area of commerce, a utopia made possible by a being they termed, The Master or Beloved Number Nine, who was at the heart of their religion, and who had ruled them for a span of 3,000 earth years.

The spaceship returned Zurbaran to his car by the roadside.

Confused but excited by his experience, he continued the balance of his drive to Acapulco, learning upon his arrival that it had only taken him 90 minutes to complete a 6 hour journey.

He did not see the space people who had befriended him and offered him hospitality again for 15 years, until one night in January 1969 near the outskirts of Mexico City, he gave a ride to a young hitchhiker who turned out to be one the crewmen aboard the UFO that night 15 years in the past.