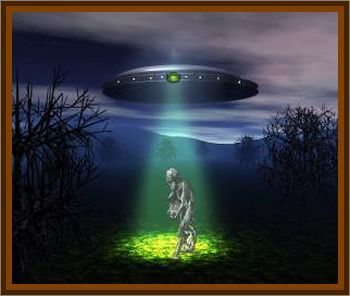 A reporter for the El Territorio in Apostoles, Argentina, claimed that Casimiro Zuk, 27, came to him with a tale about a landed UFO and an occupant who apparently landed just to stretch his legs.

He said that at around 1:00 a.m. in the morning, he was travelling on the outskirts of Apostoles when he saw a luminous object which was giving off, at intervals, very bright light.

He stopped, got off his bicycle, and noted that little by little, the object was getting closer to the ground, and upon reaching an altitude of approximately 1650', it described a semi circle from east to west.

Later, it touched down gently on the nearby beach area about 1350' from Mr. Zuk. He described it as some kind of self propelling vehicle of an elongated form some 16½' in diameter at the center.

Around it, he said, was a kind of visor, similar to that in an automobile used to protect passengers from the Sun’s rays, and under this were several windows.

The total height, Zuk said, he estimated to be 8½'.

Then a hatchway began to open slowly, from which emerged a person of normal height, dressed in an outfit resembling that of an aviator, which covered him from head to foot, and gave off luminous sparkles. The being walked several feet as if wanting to stretch his legs and then, returned to the ship which, after the hatch was closed, began to ascend in a spiralling motion and made a howling noise.

Asked if he had heard any other noise, Zuk said that when the individual came out of the device, he could hear what seemed to be soft music.