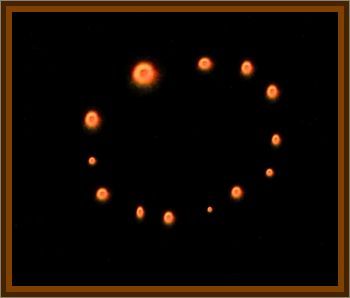 On October 27, 1977 we had taken off in the helicopters for a normal training flight when, at a distance of about 900', I saw in front of me an extremely bright orange colored circle. It looked like a ring of fire in the sky. We at once contacted the control tower, who replied that nothing was visible from the ground. Meanwhile, the fiery circle continued to be there, right in front of us, and moving at a speed almost identical to our own.

Then I asked the other two helicopters of our squadron whether they could see it. One said they could, and confirmed that they were seeing the same thing as we were, while the third helicopter, piloted by Captain Romolo Romani, replied that they saw nothing.

The luminous circle then suddenly vanished at a speed impossible for any aircraft of this world to equal. I called the control tower again, and was informed that in the meantime other people had seen it and had been following it with binoculars. But the radar had detected nothing.