5 Or 6 Shiny Circular Objects Near Storm 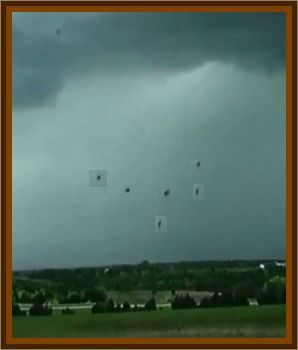 Major Lewis F. Baker, A/2C William J.Nieland, and A/2C Joseph C.V. Abramavage, were outside of the Weather Station watching a thunderstorm and observed 5 or 6 disk shaped objects moving about in a helter skelter fashion on the west edge of the storm.

The objects appeared to be the size of a pea held at arm's length and a silvery metallic in color.

There appeared to be no set flight path of the objects and the maneuvers were erratic and very fast. The objects were observed for approximately 90 seconds. Joseph C.V. Abramavage said that about 10 transient military personnel watched the objects before boarding a plane to Washington. Later at around 7:01 p.m. at Long Beach, Joe Zibello, a civilian, reported observing 5 or 6 very bright objects the size of a pea held at arm's length with a high degree of maneuverability.

The objects made fast up and down movements similar to the shape of a N.