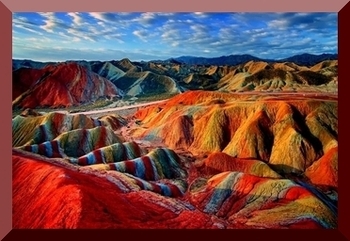 The Rainbow Mountains of China, within the Zhangye Danxia Landform Geological Park are a geological wonder of the world.

These famous Chinese mountains are known for their otherworldly colors that mimic a rainbow painted over the tops of rolling mountains.

This is just one example where geology catches our attention and begs the question as to what causes the mountains to be colored the way they are.

The Zhangye Danxia National Park is located in the Gansu province in China's northwest covering 200 square miles. The site was named a UNESCO World Heritage Site in 2009 and is the destination for many Chinese and international tourists. The mountains are cretaceous sandstones and siltstones that were deposited in China before the Himalayan Mountains were formed. The sand and silt was deposited with iron and trace minerals that provided it with the key ingredient to form the colors we see today.

What was once a layered horizontal and flat stratigraphy was disrupted by the Indian Plate colliding into the Eurasian Plate approximately 55 million years ago. Much like when two cars get in a wreck and the bumpers fold and break, a similar process folded what was once flat sandstones into the mountains we see today.

This process uplifted mountains and exposed sedimentary rocks that were otherwise hidden well below the surface of the earth. Weathering and erosion removed the overlying layers of continental siliciclastic rocks and exposed underlying formations with different mineralogy and chemistry. This causes the striking variation in colors seen across the mountains.

So now that you have an idea of how the mountains formed, how they got the color we see today will be explained.

Precipitated groundwater moves through the sandstone grains and deposits trace minerals in between the grains. This precipitate can build up to a point where there is no longer an pore space between the individual grains, cementing them in place. This process is what imparts the trace minerals mentioned below and allows for the otherworldly coloring of sandstones around the world.

The primary color is a deep red sandstone, not unlike those in British Columbia called the Rainbow Range, or the Fountain Formation in the Flatirons, Red Rocks Park, or the Garden of the Gods all in Colorado. The red coloring is due to an iron oxide coating and cementation, also known as hematite, between the sandstone grains.

This is the exact same process that takes place when a piece of metal is left out in the rain and forms a red layer of rust around the outside.

Weathering, mixed with water and oxygen oxidizes elemental iron into iron oxide, which is notable for its dark red coloring. The Rainbow Mountains are largely characterized by this iron oxide staining of its sandstone Danxia formation. Most of the time iron oxides impart a dark red pigment, however, there are instances where oxides form different colors. For example oxidized limonite or goethite will produce brown or yellow staining of sandstones, magnetite can form black staining of sandstones. If there is iron sulfide present, you will get a metallic yellow color imparted by the sulfur. Meanwhile, green coloring is often due to chlorite or iron silicate clays. These are just some examples of how sandstones can be altered in coloring during diagenesis.