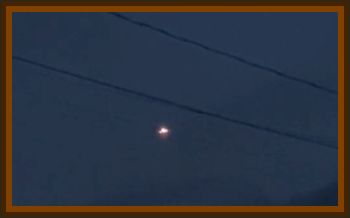 Location: Farm Outside of Zell, SD

This event took place over 30 years ago. My summer vacation was spent working on a farm.

At 3:00 p.m., on a Saturday afternoon, while waiting on a township road to be picked up by my mom & dad for ride home for the weekend, I heard a very strange sound, somewhat akin to the sonar on a submarine.

I looked around the area and to my amazement observed a gray disk about the size of a hood on a car basket weaving between the high voltage power lines that were located by the road.

On seeing the object I became fightened and wasn't sure what to do. I then put my head down on the mail box and closed my eyes. I heard a sharp distinctive sound, differant from the first. I raised my head and looked up to its original position and then scanned the area of the farm and saw it again.

It was directly over the apex of the farm house's roof.

On looking at it again, it appeared to be spinning on an axis of some type, wobbling slightly as it turned.

As I observed it, it took off in only what I could describe as an arc at a high rate of speed unlike anything I have ever saw. Then after it was gone from my sight there was a loud snap as if a gigantic rubberband and been stretched until it broke.