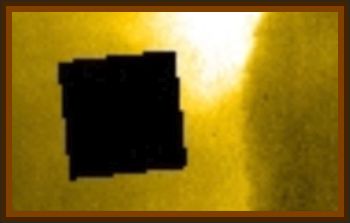 I was driving out of the town of Zebulon, NC, toward Wendell, NC along Highway 97.

I was taking my daughter, 12 at the time, home from school.

As I drove down a long hill, I noticed something large in the sky, blocking the sky over much of the road in front of me. I mentioned it to my daughter, who needless to say totally freaked out and begged me not to stop. I didn't stop, but I did drive extremely slowly in order to get a better look at it and try to remember exactly how it looked from underneath.

I did for about 2 minutes or more. It looked very much like the 3D picture. The 3D picture was hard to do and the lighting is not quite right, but it is as close as I can get to what I saw that evening. Although the picture shows square edges, I have yet to learn how to make rounded corners in the program I used.

The large ship flew silently. It flew at a constant, almost sickning, speed of maybe 15 mph or less.

The outside of the ship, or rather the bottom which is all we saw because of the size of it, was black, but not shiny. Dull black is what we saw.

The ship was bigger than anything I had ever heard of, maybe being 6 football fields or larger. It was so large, neither one of us could tell if it was round or square or what, although I watched it intently, I believe it was of a rectangle shape, for we could see 2 of the sides, but not the other 2.

I looked to the right and to the left into the tops of the trees to see just how big the thing was, but could not see an end to it in either direction. It flew just above the tree tops, at least it looked very very close to us.

As it flew over my car, with my daughter now screaming histerically, I noticed that while one side of this huge ship was just beginning to hover over the car, the other side that was seeable was still about ¼ mile down the street. The bottom of the craft had something molded into the bottom like huge rooms with rounded off corners sticking out of the bottom. There were round tubes that went from one room to another.

I only got a look at the part of the ship that came over the road. I drove even slower, hoping that someone would come down the road so I could stop them and tell them to Look, There is a ship.

I saw no lights what so ever and the bottom of the ship was extremely visible to the naked eye.

I wouldn't ever call it a UFO. This was a ship. It was bigger than anything I or my daughter has ever seen, and it flew right over my car and over the town of Zebulon, NC. This is not the only time things have been seen here.

I emplore the public to please report anything seen of this magnitude in or around Zebulon, NC, or anywhere else for that matter.

Someone besides us had to have seen this huge ship or even got a glimpse of a ship that has huge molded rooms on the bottom.

I have yet to read of anything like this in your postings or anywhere else on the internet. I need other witnesses besides my daughter and myself.

It was in the late Spring of 1994, my daughter had turned 12 in January of that year. The trees had leaves on them and the children were still in school.