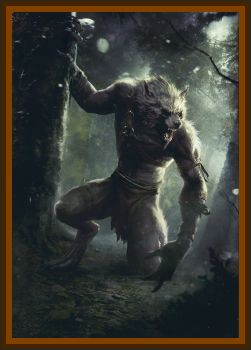 It was reported that a terrible wolf was loose in the woods and was causing great harm to humans and cattle.

Once he even ripped a child to pieces. All the peasants in the region banded together and pursued him, finally surrounding him in some brush.

They were about to kill it when suddenly a large man like figure holding a club appeared before them. Thinking that the terrifying figure was a werewolf the peasants scattered.