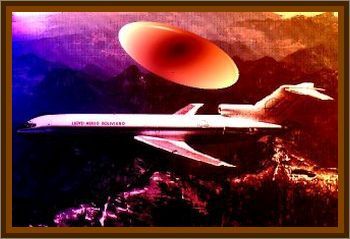 On the night of April 21st 1991 about 9:00 p.m. Captain Achille Zaghetti, was piloting a McDonnell MD-80 aircraft, he was astounded as a UFO past his aircraft and then flew over the coast of Kent at a height of more than 22,000'. The incident was classed as a near miss because the UFO was just 1,000' above the airliner, and an official inquiry was launched by the CAA.

The pilot said the object was light brown, round, three meters long, and did not describe any means of propulsion, The aircraft was under the control of London air traffic control center who had no other aircraft in the vicinity, but consistent with the pilot report, a faint radar trace was observed ten nautical miles behind the Alitalia aircraft.

Extensive inquiries have failed to provide any indication of what the sighting may have been.

The next close encounter took place on June 1, 1991, when an amber cylindrical object, 10' long, was seen at close quarters by the crew of a Britannia Airways Boeing 737 bound for London from Dublin. Sixteen days later, yet another cylindrical-shaped UFO was sighted by German engineer, Walter Leiss, aboard Dan Air flight DA 4700 as it headed toward Hamburg.