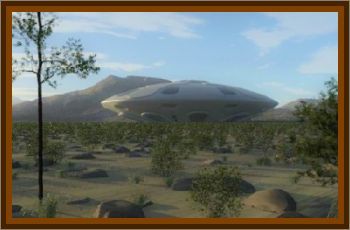 Freddie, his wife and their young child were taking a drive around the rainforest area on Route 191. After cruising the area the road took a turn and the pair inadvertently took a detour deep into the forest. After a while they came up to a camouflaged gate deeper into the forest and after inspecting it they decided to drive through it. As they drove on the path in the woods they noticed that it was well lit by blue light bulbs on each side of the road.

They drove through some hills for about 2 miles when the road abruptly ended. At it's end there was a large metal gate and a building on the other side of it. At that moment two 6' tall humanoid figures appeared and ordered the pair to stop and asked who they were. The men wore tight fitting black jumpsuits, resembling diver's outfits, a wide black belt, black gloves, and large black boots with metallic gold straps. They also wore large dark oval shaped helmets with dark visors. Their faces were not visible.

In eerie metallic electronic sounding voices the strangers ordered the witnesses to step out of the car. The child remained sleeping in the back seat. One of the men took a long thin metallic tube with a mirror like tip and examined the vehicle. The figures asked the couple how they got there and then looked at the sleeping child inside. They then held a short conversation in a grave guttural language resembling German. One of the men then left the area and a blue pickup truck now arrived at the scene.

Two men wearing blue coveralls were in the vehicle and spoke in Spanish to the witnesses, again asking them how they got there. The men then looked at the child and commented something in a low tone of voice to the strange figure in black that remained on the scene. At that moment Freddie noticed a glint of light coming from what appeared to be a rectangular shaped hollowed out area in the nearby wooded slope of a hill. There appeared to be several huge glass like doors and inside there was a disk shaped object, that was encircled in rectangular shaped windows and was 30' in diameter, it appeared metallic & aluminum in color.

Thinking that he was seeing something he was not supposed to see, he quickly averted his gaze. The men did not appear to notice that Freddie had seen anything. The men in the blue pickup then ordered the couple and their child to follow them out of the area in their vehicle. They were quickly escorted out onto the main road.