22+ Witnesses Observe a UFO Larger than a Football Stadium 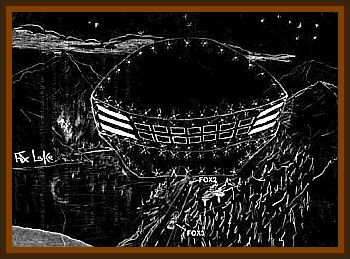 First drawing by UFO witness FOX3 depicting the UFO encounter he and FOX2 had near Fox Lake, Yukon.

First drawing by UFO witness FOX2 depicting the UFO encounter he and FOX3 had near Fox Lake, Yukon. The drawing depicts a side view of the UFO when it was still out over the lake.

FOX3 estimates the angular size of the UFO while on site at the UFO sighting location. The geometry between his eyes and the tip of his hands was measured and used to calculate the UFO size.

His cousin, FOX2, was 2000' ahead of him during the UFO sighting and was directly underneath the edge of the UFO.

This information was used to obtain a UFO size of 1.1 miles in length.

The following is as brief a summary that could be made from a complex 22 witness event and still retain a good portion of the impact and scope of what had occurred. More detailed descriptions and vivid quotes from the witnesses can be found in the individual witness testimonies.

Witnesses FOX2 and FOX3 were driving together from Whitehorse to Carmacks in separate vehicles. As they were travelling northbound on the Klondike Highway adjacent to Fox Lake, they spotted a huge UFO out over the frozen lake. Fox Lake is on the west side of the highway. Both of them slammed on the brakes stopping about 2000' apart from each other. FOX2 got out of his vehicle for a better observation. The UFO proceeded to slowly drift towards FOX2 and after a few minutes he found himself almost directly underneath the object.

FOX3 continued to observe his cousin FOX2, both men were in complete awe. The UFO continued to move slowly across the highway and out over the hill to the east and eventually disappeared behind it. Immediately after the sigthing, FOX3 noted that the time was 8:30 pm. Both FOX2 and FOX3 could discern that the lights were attached to a smooth and solid object.

At the very same time that FOX2 and FOX3 were observing the UFO move across the lake, FOX4 and FOX5 were approaching the southern tip of Fox Lake also heading northbound. What they observed was a huge row, or rows, of lights slowly moving across the lake. There were other lights on and around the UFO as well. Their first thought was that it was a large truck in the distance, but it couldn’t be, it was out over the lake. Their next thought was that a Boeing 747 was crash landing. But that couldn’t be either, it was moving much too slowly to be an aircraft. It took them about 2 seconds to process these thoughts when they realized that it must be a UFO. They got very concerned. They had a 2 year old son in the back seat and they were travelling towards this thing. After some debate they decided to continue their journey. After all, they could no longer see the UFO as they approached a hill that obscured their view plus there was some traffic ahead of them.

FOX5 looked at the car clock, it was 8:23 p.m.. None of the witnesses heard any sound coming from the object.

A few minutes later, when FOX4 and FOX5 were passing the Fox Lake campground, they passed by 2 vehicles that were pulled over with 2 men outside looking up at the sky. They turned around and pulled over to talk to them. It was FOX2 and FOX3 carrying on a lively discussion, What the heck was that?

After a few minutes FOX4 and FOX5 left and eventually stopped at Braeburn Lodge about 21 miles further up the highway. FOX4 walked into the lodge and said to Steve Watson, the lodge owner:

Steve, I really need a coffee.

Oh, you must have seen what FOX1 saw?

In fact FOX4 recalled seeing FOX1 leaving Braeburn Lodge just as they got there.

About half an hour before the sighting described above, about 8:00 p.m. FOX1 was driving along Fox Lake and had noticed a light in the distance which should not have been there. He did not think too much of it but as he got closer to the light, he could tell that it was illuminating a long smooth curved surface. He then passed some traffic and after his eyes readjusted to the darkness, the curved surface and the light were gone. However, his eye caught a group of rectangular lights moving over and behind a hill to the east. At this point he got an exhilarating feeling and sped up in order to reach a less obscured location in the valley so that he would have a chance to see the UFO again.

He pulled over and got out of his vehicle but didn’t see anything more unusual. He continued his journey and pulled into Braeburn Lodge where he gave Steve a description of what he saw and also made drawings for him.

FOX2 and FOX3 eventually pulled into Braeburn Lodge and gave their description to Steve as well.

There was also a 6th witness to the Fox Lake sighting but it is unclear what time she had driven through the area. FOX6 was driving in the vicinity of Fox Lake when she noticed a glow on her dashboard that could not be accounted for by the interior illumination of her vehicle. She leaned forward to look up through her windshield and observed a large arrangement of multi colored lights. The interior lights in her car started to go dim and the music from her tape deck slowed down.

At around the same time, between 8:30 p.m. and 9:00 p.m., the Village of Pelly Crossing, about a 2 hours drive to the north of Fox Lake, was experiencing its own truly incredible UFO sighting.

PEL1 was tending his trapline northeast of Pelly when he observed in the distance to the southwest a long row of lights slowly moving over the hills. At first he thought it was a large aircraft coming down. But it was moving much too slowly. It’s a UFO.

As he was walking his flashlight happened to point in the direction of the UFO. As if reacting to his flashlight, the UFO started speeding rapidly toward him. He instinctively cupped the end of his flashlight. As soon as he completed this gesture, the UFO stopped in its track.

In a matter of less than a second, it was hovering an estimated 1000' in front of him. PEL1 had to turn his head from one side to the other to take it all in. Again there was no sound at all coming from the object. A beam of light emanating from the bottom of the UFO swooped the ground once directly underneath the object. Was it a search beam? Looking for him? The UFO then drifted slowly to the right. There were other beams emanating from the craft as well, a greenish phosphorescent color beam shone horizontally out the front, right, 2 beams at the back, left, rotated slowly to a horizontal position.

All the beams could be seen clearly as there were ice crystals in the air. PEL1 turned away from the UFO momentarily and ran across a small clearing. When he turned back to look at it, it was gone.

At about the same time, PEL2 and PEL3 were travelling northbound just south of Pelly Crossing. To the north they spotted a huge row of lights slowly moving from left to right. They pulled over at a gravel pit just south of the village to get a better look and got out of their vehicle. PEL2 noticed that the Big Dipper was just above the row of lights and compared the length of the lights to the width of the Big Dipper. They were about the same length. This observation was very important since it established a well referenced angular size of the UFO from PEL2 and PEL3’s perspective, important for a more accurate triangulation and calculation of UFO size. The map shown shows the location of witnesses PEL2 and PEL3 and their estimate of the UFO trajectory.

The accounts of witnesses PEL1 through 3 were enough to complete a calculation of UFO size. The observations of witnesses PEL4, 5, 6 and 7 about the same time provided a second triangulation. The 4 women were taking an evening course at a small community college in Pelly Crossing, a satellite school of Yukon College. They were out on a break on the front deck of the one story building looking towards the west when they too observed the row of lights. The row of lights was travelling slowly almost towards them and slightly towards the north. They recall the object being huge as well, there was no sound at all. It moved slowly over the hill to the north and disappeared behind it.

Then there was the UFO sighting near the Village of Carmacks seen by 9 witnesses. The UFO was observed by 2 groups of people.

CRM1, 2, 3 and 4 were on the highway northbound in a pick up truck just south of Carmacks; CRM5, 6, 7, 8 and 9 consisted of a husband, wife and their 3 children. They were watching television when they spotted the row of lights out of their window.

The 4 men travelling together pulled over near the landfill at the southern edge of the Village to get a better look at the UFO. They watched the noiseless object move slowly to the northeast, curve around them to the south and head up a valley adjacent to the microwave tower south of the village where it just vanished. At one point the UFO was partially obscured behind a nearby hill and one witness recalls the UFO slowly reappearing on the other side of it. He remembers waiting a long time for the last light to reappear from behind the hill, that’s how slow and large the object was.

The object took up about a 60° to 90° horizontal chunk of the sky. CRM1 recalls hearing about the Fox Lake UFO sighting on the radio the next day and surmised that they saw the UFO about an hour and a half earlier, about 7:00 p.m.

The family is not exactly sure what time it was when they saw the UFO, just that it was in the evening. They observed the row of lights just to the northwest of them moving slowly to the northeast. The lights were just over the treeline and there was no noise at all. The lights continued to move until they disappeared one by one behind what appeared to be an invisible wall. There was no mountain in that direction that could account for this. With the UFO sighting occurring just 2 weeks prior to Christmas, the 3 children thought that it was Santa Claus and his reindeer in the sky.

An estimate of the UFO size by triangulation was not possible for the Carmacks UFO sighting, as the geometry of the witness locations in relation to the UFO was less than ideal. Furthermore, it was unclear whether both the family and the group of 4 men in the truck observed the UFO at the same time. Perhaps the UFO made more than one pass by the Village that night.

There is also some evidence to suggest that this sighting event encompassed an even larger area as UFO reports were heard on CBC North radio the very next day mentioning sightings in the communities of Dawson, Mayo and Watson Lake. No witnesses from these additional communities have thus far come forward or been identified.