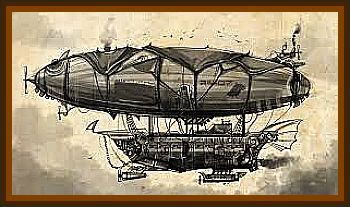 A teacher named Lu Yu who lived in the village of Yugiu was out standing outside his home under a torrential rain when he noticed two ships which were sailing on top of the clouds above some ruins across from his home.

On the two ships which measured more than ten arms each, he could see several tall men wearing each one a hat and multicolored clothing. They were holding each a pole in each hand as the ships moved quickly overhead.

The teacher Lu Yu, then alerted ten well read men, who came beside him to observe the phenomenon. The ships then descended over the teacher and the ten other men and the men onboard the ships wearing the multicolored clothing then passed their hands over the mouths of the well read scribes who could not speak anymore.

At this time another men appeared on one of the ships, escorted like a Mandarin and accompanied by a bonze.

Some time later the ships flew away, through the clouds and were seen descending about a kilometer away near a cemetery. When the ships left the ten well read scribes were able to speak again. But five days later, Lu Yu died of unknown causes.