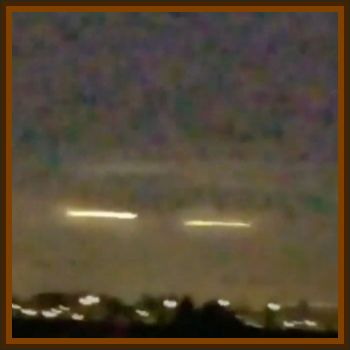 My date and I had just returned to my place after an evening out, no drinking or drugs.

As I was stepping up on the curb to go into the house I noticed a dark object moving slowly back and forth at what appeared to be tree top level a few blocks behind the house. At the time I was active duty Air Force stationed at Beale AFB and felt I had a pretty good idea of the type of aircraft that operated in that area.

What really caught my attention was the close proximity of the object with no sound. I asked my date if she saw it and she said it was probably a helicopter. I was sure it wasn’t so I ran into the house and got my binoculars. When I got back it was still hovering in the same manner. As I could see it better now, there were what appeared to be windows down the side, like you would see on a commercial jet.

My mind was racing trying to explain what I was seeing, as it turned there seemed to be a white light like landing lights or a spot like actually illuminating the tree tops which kinda gave me some idea of how close it actually was.

When it turned away I thought I saw tail exhaust, 2 like the SR-71, and then as I was watching it turned toward the sky and started to ascend.

This is when I became convinced that it was really from another world, It instantly zoomed up to the size of a star and was blinking blue and red high in the night sky. If I hadn’t been watching it though the binoculars, I would never been able to follow it and after it went up it probably wouldn’t be noticed by anyone as anything but a distant star, planet, or satellite.

Many times that night I went out to see if it was still up there and it was. After that night I started watching and noticed that there were several of such lights up there and some would move in unnatural patterns.

Another thing of interest, that I have noticed, even though I haven’t seen then that close since, when I start watching them they seem to know I’m watching and move farther away.

I don’t bring this up very often because most of the time I get the response like I must be delusional. I have been on the runway during an SR-71 launch and have seen it turn skyward with exhaust flames rolling off the runway as it went full and went almost straight up.

This object was so much faster that I can’t begin to understand the physics that would keep it from ripping to pieces. I know the published speed of the SR-71 is mach 3+ but I can tell you that when I was in a KC-135Q on a refuel mission, we flew on a straight path for over 4 hours at more than 450 knots when they told us the SR-71 that we were to refuel had just taken off. By the time the boom operator and myself walked to the back of the plane and got into position in the boom pod.

The SR-71 was pulling up behind us. That plane had covered in about 5 to 10 minutes what had taken us over 4 hours.