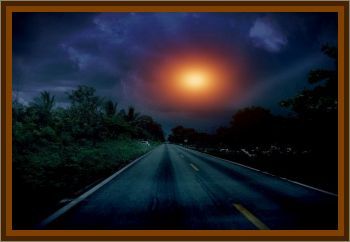 Mrs. L. Doe was bringing her husband home from the hospital after treatment for an injury suffered in an industrial accident. At 12:30 a.m. they were within a quarter mile of their home at Yorkville, when a bright light to the right of the car, at 30° elevation became evident.

It resembled a brightly illuminated ice cream cone flying broad end first, with the pointed end slightly elevated above the front portion. It came out of the northeast and when at an estimated quarter mile from the car at treetop level, it righted itself, giving the appearance of a triangle with the point up and flat portion pointed toward the ground. It appeared to Mrs. Doe to be two or three stories in height as it hovered, showing horizontal strips on the body which resembled siding on a house.

On the bottom, there appeared to be a lattice like affair which impressed Mrs. Doe as looking like diamonds and rubies, indicating the presence of red and white lights.

The object lit up the ground below, spun on its axis two or three times, flashing an exceptionally bright light.

Then a strip peeled back, down toward the witness, and the object tilted back, revealing the bottom portion. In this position, Mrs. Doe could see a dim, luminous light like an I-beam and was afforded a view of the inside of the object which she compared to the spongy appearance of iron ore.

At this point, the car engine and lights died. The car, a Chrysler Imperial, stopped completely. The front end of the car rose up until it was off the ground. Mrs. Doe screamed, waking her husband who had been dozing in the seat beside her.

He said: I’ll start this car, and reached over and turned the key, but with no results.

It apparently hadn’t dawned on him what had happened. The car wouldn’t start and both were aware that the car was definitely elevated in front.

Then the lighted object moved off in a smooth motion to the northwest. As it left the area, the car came down slowly, but with a noticeable bump when it again rested on the roadway. Mrs. Doe was then able to start the car and all was normal.

Arriving at home, they found no marks on the car, but the next day, when visiting their landlord who lived a short distance up the lane from them, they found that his wife had been up at approximately 12:30 a.m. to use the bathroom and had become aware of a very bright light, which shone through the picture window of the living room.

She thought at the time that it was most unusual to have lightning that morning, as the sky was clear and cloudless.

The testimony of the landlord’s wife, is corroboration of a kind, in that an unusual and unidentified light was in the area at the time of the Bs experience.