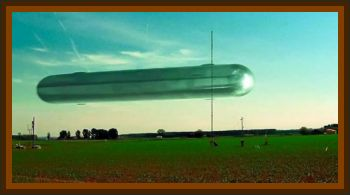 Ronald E. Johnson, a farmer living on Route #2 in Yorktown, a few miles west of Clarinda, IA, was awakened by a loud roar.

On getting up and going to his window, which faced South, he saw a cigar shaped object, approximately 60' in length, landing in a field within 50' of his house.

The object, which had apparently come out of the North, came into view as it moved over the house.

The night was foggy and a light rain was falling at the time. No moon or stars were visible. The roar of the object ceased as it landed.

On the end of the object closest to the house, Johnson saw a brilliant red light, which bathed the area in a blood re” glow. On the farthest end, he saw 2 blue lights approximately 8" in diameter, which extended above the body of the object. The surface of the object was of a dull finish, except for an amber glow that extended partway along the bottom. The object rested on a series of from 17" to 20" long legs.

After landing, the object gave off a series of loud, explosive, cracking noises, like gunshots, at regular intervals. Johnson said the air was filled with an odor which he described as similar to ozone. He saw nothing leaving or entering the object. He watched it sitting motionless in his field for about 20 minutes and finally went back to bed. He got up a short time later to see if it was still there, but it had either departed silently or had turned out its lights. The explosive sounds were no longer heard.

In the morning, Johnson discovered that sometime during the night his livestock had all bolted to the far end of the pasture and appeared to be acting up considerably. They would not return for feeding that morning.

Examining the landing site he found a series of circular impressions 6" in diameter and spaced alternately in 2 rows. The distance between impressions was 2½'. To the East of the landing impressions, he found a second set of imprints, round on one side and square edged on the other, and divided at the squared off edge into 3 sections. These impressions were not made by his cattle, according to the farmer.

One other peculiar detail was noticed was that 2 power line poles appeared to have fresh depressions in the wood at regular intervals as if it had been recently climbed. The poles were smeared with dirt. Wires rising on the poles had small, regular spaced notches.

Johnson reported the incident to Deputy Sheriff Dick Hunt, who made an investigation. A complete report was said to have been sent to Offut Air Force base; however, Johnson was not queried by any official investigators, and if the report is among those in the official files, it was not released to the University of Colorado, who requested information on it in July 1967.