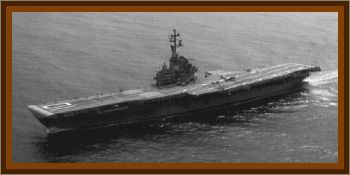 This is a story about a curious event that took place about 1966. We were days out of Pearl Harbor enroute to Japan for a port call then on to Vietnam. I was one of four lookouts on duty on the 07 level, two forward, two aft. I was on the forward station. We were steaming west with our 4 destroyer escorts on station about 2 - 3 miles out, each on our quarter beams. It was about 10:00 p.m. and the weather was balmy with clear skies. There was no activity, just a straight run to Japan. The other lookout and I looked up and saw a light in the sky coming towards us from the port side. We were surprised because CIC had not said anything to us about an approaching aircraft. It looked like a bright landing light coming at us. We called down to CIC on the sound power phones and reported the aircraft. They responded with negative, no plane on radar. Meanwhile the light kept coming closer and getting bigger.

The light is now almost overhead and rather large. Then it stopped. It just stayed over us for several minutes with no sounds coming from it. CIC kept insisting there was nothing showing up on radar. The bridge watch was also reporting the light as was the two aft lookouts. We were all on the same phone system. After several minutes of hovering over us, the bright light went much brighter and lit up the entire task group almost like daylight. We looked at each other and said we don't have anything that can do this and they, the Russians, don't have anything like this. What the hell is it? Now the whole ocean and destroyers were lit up for a number of square miles. The really bright light went off leaving the original stationary light as it was. Then it started to move from port to starboard and then shot away and faded from sight within several seconds. All this without a sound.

I estimate that between the guys on duty aboard the Yorktown and destroyers, there had to be a least 100 guys that witnessed that incident. Now I have to tell you I'm the kind of guy that has to kick the tires before I can tell you what I saw. All I know is what I just related. And no, I've never seen anything like that before or since.