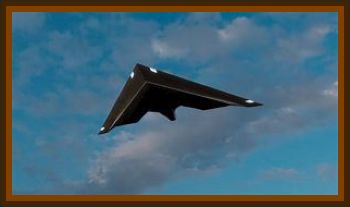 At 8:45 p.m. Eastern time I was driving down the hill just before my house and I noticed a set of 3 bright white lights that seemed to just hang in the sky.

It looked abnormal to me, so as soon as I pulled into my driveway I got out of my car and walked to the road where I could see the lights. Upon observation I saw that the lights were traveling slowly in my direction.

I watched as it approached and it seemed to be maybe 2,500' or 3,000' in the air. It was dark outside but the lights were very bright.

It appeared to be a black triangle with a white light on each of the 3 corners with one red light in the very middle of the craft. The white lights were blinking but I don't recall if the red one was or not.

As it passed I noticed it was totally silent and on the back end of the craft I could almost make out a line of dimmer lights that were in between the rear corner lights. It may have been a reflection off the craft or dimmer lights, it was hard to tell. The craft traveled in a straight line and was starting to go behind the treeline. No leaves on the trees yet.

There were 2 jets higher in the sky that seemed to be following it. One of the jets was a lot higher than the craft and the second, even higher than that. I could hear the jets and was slightly annoyed because of the fact that since the triangular craft was so low I knew the sound was not coming from that.

If it were a plane or jet that low it would have been much louder than the sound of the jets I heard. This thing seemed to silently glide across the sky.

The craft was traveling in a north easterly direction and the whole sighting took place within a 4 minute period. This also took place on a full moon, which was really big, by the way.

I have always been interested in UFOs but have never seen one. I'm almost 40 years old and I'm an honest person who does not make up lies or file false reports. I was not under the influence of any alcohol or legal or illegal drugs.