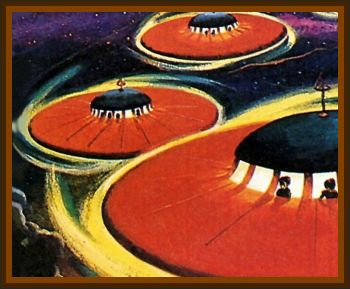 Until today I was unaware of this.In the summer of 1956 my parents and I lived in Wyoming.

They decided to go to Yellowstone and it was there that I saw what I am telling you now. Even though I was 3 I recall much about the trip because Yellowstone was such a special place. I think my parents were probably very impressed so it stuck in my mind.

Anyway, we had spent the night parked along the road, not in a camp ground or in a cabin.

My mother recalled that it had been a very spooky night, very dark.

As we left the park the next day we traveled South along a narrow highway. We were in a black Hudson, and I was laying in the back window well, it was my favorite place to ride on long trips.

As I looked up at the sky and trees I saw 3 objects coming up from behind us about 100' above us. They followed behind the car staying in between the trees that lined both sides of the road. I remember I had seen them as we were coming around a curve. They looked like metal painted orange with yellow ribs on their undersides. Each was a disk about 20' wide and on top was a dome with a large glass or window.

In each was a human like figure. One disk pulled away while the other two closed in on the car dropping to about 30' altitude. The disk nearest the car tilted downwards at an angle so that I could see the pilot clearly. In my 3 year old memories I recall thinking of the pilot in the lead craft as a helicopter pilot wearing dark sunglasses. My family at that time was too poor to go to movies and we did not own a TV, so the only thing I could relate the objects to were helicopters.

I waved at the pilot and he held up his left hand palm facing me and waved his hand kind of slowly back and forth. I jumped down into the back seat and leaned over to tell my parents that there were helicopters behind us. They looked out the windows but the objects were gone.

All I recall is that they didn't really question me about it much and dropped it.

This memory alway!s stayed with me and was never forgotten. I didn't dwell on it but every time I saw our Yellowstone pictures or recalled the trip I also recalled the 3 crafts. However it wasn't until I was about 10 that it dawned on me, being older and wiser:

Those were not helicopters.

Do you know it was not until 1996 that it suddenly dawned on me that those guys might not have been wearing sunglasses.

Last year I did a little study and began to notice that appearances of 3 saucers with the outlines I had seen also seemed to turn up in other areas. But there is more to my story.

Neither of my parents recalled the incident, which seems normal since at the time I had told them it was helicopters and hence it wouldn't have been something to stick in their memory for several years.

Note: in about 1989 my mother called me in a panic one day to tell me a dream she'd had, my mother almost never recalled dreams and claimed she never dreamed. She told me that she had dreamed that a UFO was over her house and that beings were coming into her bedroom and surrounding her.

But she said she woke up to hear a real noise over her house, it was a National Guard helicopter, there was a helicopter training base north of town in Norman, OK. What I wondered about was the connection of the helicopter noise to the intense UFO dream she was having.