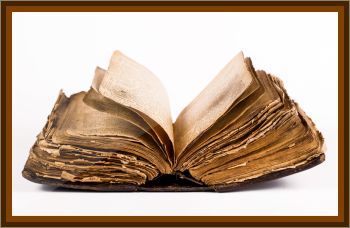 The Yellow Book or Bible is the alien’s history of our universe written by the aliens themselves as well as their interactions and involvement with Earth’s development/evolution. It was brought to Earth and presented to the U.S. government at the famous Holloman AFB landing in April 1964 by female EBE #2 which was also translated by her.

The Yellow Book was provided by the Ebens. It isn't exactly a book. It is a block of material, approximately 2½" thick and transparent in nature and appearance. The reader looks at the transparent surface and suddenly words and pictures appear. It is an endless series of historical stories and photographs of our universe, the Eben planet and their former homeworld, and other interesting stories about the universe. It also contains a historical narrative and various accounts about Earth’s history and distant past.

To this day, very few people have actually seen or read The Yellow Book. As has been commented on by others, it would take a lifetime to read it and another lifetime to understand it.

When you place the book close to your eyes, you will begin seeing words and images flashing before you. Depending on the particular language you are thinking, that particular language will appear. So far, the USG has identified 80 different languages. Pictures also appear.

The Yellow Book tells the story of the Ebens lives, their exploration of the universe, their planet, their societal life and other aspects, including the Eben’s longtime relationship with Earth. It tells of their first visit to Earth about 2,000 years ago. It displays Earth as it was in those days. It also shows an Eben, who took the appearance of an Earth Human, Jesus Christ.

According to The Yellow Book, this Earth Human established religon on Earth, Christianity, and posted the first alien ambassador on Earth.

The Yellow Book goes on and on and on and on. It's doubtful that anyone knows how long it goes on or that there is any way to find the end of the book. There is no known end to The Yellow Book. It's understand the record for reading it's content is about 22 straight hours, which was done by the President’s Scientific Adviser under the XXXXX administration. Also, there is no known way to stop reading in one particular place, put down The Yellow Book, and then resume at the same place. Once put down, The Yellow Book and picked up again later, the book starts from the beginning. Although the book can somehow determine the language of the person who is reading, it can not determine the uniqueness of that person. In other words, the problem with reading it, is that one must start all over from the very beginning once you put it down. If it took you 12 hours to reach p. 564, events, and then you put it down, you would have to start all over at the very first words and images displayed during your first read, and only once you passed the 12 hour mark would new information you had not seen in the previous sitting would now appear.

The Yellow Book goes back to around 2,000 years. It may have some views/images/history that go back even farther than 2,000 years B.C.

References of our universe from The Yellow Book: As for the universe, according to the Ebens, the universe was created in a split second, similar to our Big Bang Theory, and expands over a period of billions of years. The Ebens don’t refer to years as our years. They speak of time, but in terms of an event clock, so to help us better understand, the Ebens detail our years as a point of reference. According to the Ebens, our universe expands for about 25 billion years.

The Yellow Book, which puts things in a different perspective. The predictions that Yellow Book contains therefore would have been collected in the future as things that had happened in their past. Again, however, it is important to stress that many of the predictions have thus far failed to happen.

The late Bill Cooper, in the Crill Report, claims that O.H. Crill, an exchange ambassador from Tiphon in Draco, was one of the main sources of information for the Yellow Book.