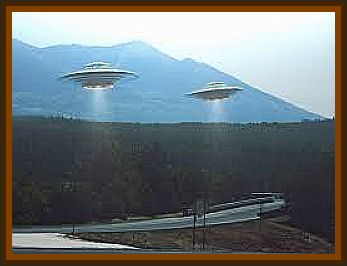 The following article was printed in the Tri-City Herald, Kennewick, WA on April 17, 1977. Very interesting.

Mid-Columbians have been looking to the heavens for years and haven't always been able to explain what they see, but they have reported 107 unidentified flying objects, UFOs, in the eight county area in the last 20 years.

Project Blue Book, discontinued in 1969, was operated solely to determine if UFOs presented a threat to national security. It was determined they did not.

Since the demise of the Air Force study, several private organizations, including Phenomena Research of Seattle, continue to document reports of serial observations. According to reports filed with Phenomena Research in Seattle and the U.S. Air Force's Project Blue Book of 1948-1969, the most reports in the Mid-Columbia region have been in the Yakima Valley.

Others are Kennewick - 8, Kahlotus - 7, Larson Air Force Base near Moses Lake, Richland and Pasco all 6, Moses Lake - 5, Soap Lake & Pendleton both 4, Heppner, Basin City & Othello each with 3, Benton City, Hanford & Ephrata each with 2, and Boardman & Royal City each with 1.

With the assistance of the Phenomena Research staff and microfilm copies of Project Blue Book files the most interesting of the reports include these summaries:

Yakima 03/22/52: A sighting of an unidentified flying object resembling a large ball of fire which would build up and then fade away, of indefinite shape, indefinite size and red in color was made south of Yakima. An Air Defense Command Alert Aircraft was scrambled on a Pronto Red One alert and observed the light which would appear brilliantly for a period of approximately 43 seconds and then fade out, at 22,500' and again and 25,000'.

Moses Lake 05/01/52: Atomic Energy Commission employees at the Hanford Nuclear Reservation reported seeing a silver object with a fairly slow air speed for about 90 seconds at 5:38 a.m. The object did not have wings and made no sound, leaving no trail or exhaust.

Walla Walla 06/01/52: Observation of one small, oval object with a definite airfoil but no visible propulsion system, exhaust or contrail made at 1:00 p.m. by Air Force reserve officer. Sighting lasted seven seconds. The officer served as a rated pilot during 1942-1945. The object moved rapidly from the southeast to the east at an altitude from 10,000' to 15,000' and a speed estimated in excess of 1,800 miles per hour.

Larson AFB 01/18/53: Located immediately north of Moses Lake, a green disk, the size of a weather balloon, was observed at 3:15 p.m. by 60 military personnel of the 82nd Fighter Interceptor Squadron until it disappeared. The disk, though appearing like a weather balloon, was traveling opposite to the direction of the wind. An F-94 aircraft was scrambled but a 30-minute search of the area produced negative intercept results. There was no other air traffic in the area at the time.

Ephrata 04/21/67: Two businessmen and their wives were returning from a night meeting on a Grant County road near Blue Lake when a brilliantly lighted object hovered before them in the roadway. When the object appeared the auto's engine stopped, the auto's lights and radio became inoperable and remained that way until the object left. Several similar reports made to area newspapers during the week.

Toppenish 01/27/77: A 6 year old boy observed a disk shaped object near his home and reported seeing humanoid like creatures. Impressions remained in the ground for several day where the youth reported seeing the disk.

Another related article is here:

Yakima reservation of Yakama Indians, It is located 5 miles south of Mount Rainer in the south of the state of Washington.

Among ufologists this place is considered anomalous and probably the most frequented UFO place in America.

Among the native Indians, many legends are known about him, among which the story of a strange man with red eyes and the ability to heal the sick.

This red eyed, in ancient times, was attached to the Yakima tribe, and when old, he asked to give him a special place for, In order to die in peace. The Indians clearly saw how, after the death of the healer, his body picked up and carried to heaven an incomprehensible flying object.

Since then, the anomalous phenomena in the mountains here, a common sight.

It was over this place in 1947 that Kenneth Arnold watched flying saucers, which triggered modern disputes about UFOs.

Later, between 1964 and 1984, 186 UFO sightings were recorded on the reservation. Typically, the stories featured red orange or white orbs with strange habits, they then hovered over the ground, then moved with unthinkable speed for bodies of earthly origin.

An extract from a documentary about the lights of Yakima:

Famous astronomer and researcher UFO J. Allen Hynek, interested in the secrets of the reservation, had achieved funding sufficient to study the phenomenon.

The program was headed by engineer David Akers, an amateur researcher.

The equipment included motion pictures and cameras, one of which was equipped with a diffraction grating for measuring the length of light waves. At his disposal were also a magnetometer, fixing changes in the magnetic field, and other instruments for measuring nuclear and infrared radiation and ultrasound frequency.

Akers began a two week observation of the window on August 19, 1972. During this time he managed to take several pictures of distant anomalous phenomena, although the images turned out to be not very clear.

No matter how mysteriously the spots looked, Yakima’s research did not bring new evidence. The same can be said about the Project Identification, a much more thoughtful and prepared phase of the program for monitoring the windows.

The initiator of this project was Harley D. Rutledge. Professor of Physics, Southeast University of Missouri. Interested in the activity of UFOs in this zone, Rutledge, in early 1973, when he arrived in Piedmont, saw 12 mysterious heavenly lights. The study of his photographs lasted 7 years. A total of 40 scientists, engineers, students and amateurs were involved in the work, the equipment costs amounted to about $40,000, that is, everything that David Akers had on the Yakima Indian reservation, and even a little more.

Along with special cameras, the toolkit consisted of 4 telescopes, a device for spectral analysis and a gravimeter used to measure changes in the gravitational field.

The Identification project registered 178 UFO sightings by the mid 1990s, and Professor Rutledge claimed that he personally saw a UFO in 160 cases, but even here the researchers, despite all their efforts, photographed a lot, but brought little new knowledge about the nature and The origin of unidentified objects.