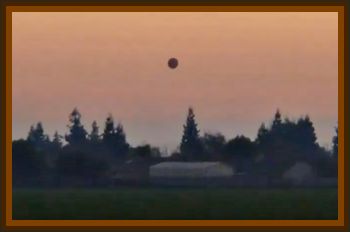 We were traveling home from Winston-Salem NC, to Hamptonville NC, from a doctor's appointment when my wife and 8 year old daughter saw a strange spherical, silvery object in the sky.

As I was driving the vehicle, I was not able to see the object from my perspective, but did observe that the sky seemed most clear and did not see aircraft visible during their sighting. The description of the object is theirs:

The object produced no vapor trail or other visible changing characteristic, and seemed almost stationary in the sky, but was shiny, and reflected the sunlight at times very strongly. The view of the object persisted for about 5 minutes during the drive until the object was obscured by low, tree lined hills.

When our vehicle entered another area on the same highway, no object or aircraft was visible. Our direction on the highway, would have probably been toward the West or Northwest, as I could see the sun out my driver window, but not in my front window, the object would have been hovering or moving over a wooded area with only secondary roads, between any large towns or cities.

I saw no sundogs or persistant natural aerial phenomena to explain this siting. I questioned my wife at length about an aircraft, but she was insistant that was she saw was spherical and not a conventional craft.

My daughter, who was sitting behind my wife in our vehicle at the time, saw the same object and described the same shape. I have no reason to believe either of them would lie to me about the event, and nothing in our conversations on the drive home were even remotely concerned with unknown aeriel objects.