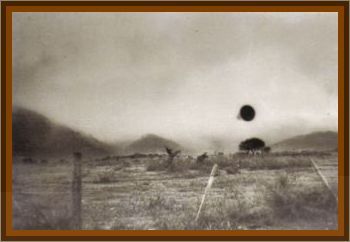 It is a single witness case, but this witness is a high-ranking officer of the Argentinean Air Force (AAF), who by a fluke was able to obtain a remarkable photograph as supporting evidence of his encounter. Even in Argentina, and perhaps due to the association of the witness with the AAF, the case was not given much publicity until 1977, when it finally was reported in UFO PRESS. The witness in this sighting is Hugo F. Niotti, then a captain of the AAF assigned to the Air Force School for Sub-officers located in the city of Cordoba. Contrary to what many would expect, his involvement in the case did not affect his military career, and seventeen years later, when finally interviewed by Roncoroni, he had risen to the high rank of vice-commodore, occupying a responsible position with the AAF.

On July 3, 1960, then Captain Niotti was driving from Yacanto toward Cordoba. The weather was inclement, typical of what one would expect for that area in the middle of winter. It was drizzling off and on, and the cloud deck was very low, perhaps 100-150 m.. The road was rather slippery, and Capt. Niotti was concentrating hard on his driving. At approximately 4:30 p.m., he was in the area of Villa General Belgrano, about 43 miles from the city of Cordoba. He had finished negotiating a wide S-curve, when he suddenly noticed a rather close and unusual object hovering near the ground to the right of the road.

Startled, he stopped the car, grabbed his camera, fortunately next to him on the seat, moved a few steps away, and proceeded to take a photo of the object, which was moving slowly. While he was engaged in winding the film to take a second shot, the object started to accelerate and disappeared into the clouds, which as stated, were very low. The whole incident had lasted about 40 seconds and had developed into the most absolute silence. This eerie silence, coupled with the bad weather and the abruptness of the incident, gave Capt. Niotti a sense of reality, which puzzled and confused him. In this mood, he jumped back into his car and continued his trip to Cordoba, where he proceeded to have the film processed. Here is Capt. Niotti’s description of what he had seen.

The object was conical in shape, with a height of 25' and a base diameter of 12', with its axis almost parallel to the ground and its base facing the witness. It was at a distance of 300' from his location and moving very slowly toward the south, perhaps at 10 KPH, always parallel to the ground. It was rotating, also very slowly. It then accelerated very rapidly, attaining a speed of perhaps 125 MPH in 3 or 4 seconds, and disappeared into the low cloud bank. This sudden acceleration without any sound was inexplicable to the witness in view of his proximity. The color of the object was a uniform dark gray. The surface was perfectly smooth without joints or rivets and had a definite metallic aspect.

As an officer of the AAF, Niotti was naturally reluctant to divulge his experience and initially told only a few fellow officers, who persuaded him to send the negatives and copies to the “Revista Nacional de Aeronautica” (RNA), the editors of this official magazine transmitted the photo to the “Servicio de Informaciones de Aeronautica” (SIA), a technical service available to the Air force. The SIA gave a good bill of health to the photo, and the sighting was reported by the RNA in its issue of November, 1960. It is remarkable that never before or after have the Armed Forces made public the results of a UFO investigation.