Fireball Or UFO Seen In Mexico 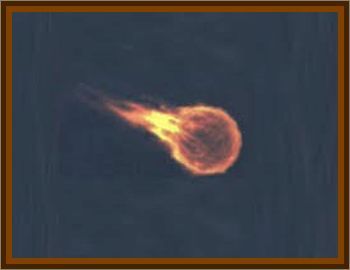 According to a news item published on August 21 2007, two unidentified flying objects allegedly fell in Valles and Xilitla.

The first of them was reported on the evening of Sunday, August 19 and the second during early morning hours of Monday the 20th. Reporters Antonio Martínez and Maribor Villalobos state that the initial report was received by Jose Angel Avalos, an officer on duty at the Centro de Control y Comando (C4) through the 066 call line.

This report was from Rubén Velázquez, who stated:

A silver object measuring 8" long had fallen from the sky in a plot of land of the San Miguel collective farm.

Another witness, high school student Oscar Gonzalez Mar, a resident of the El Sidral collective farm, told the El Mañana that he had seen a shining object streaming across the skies toward the Gulf of Mexico between 8:00 p.m. and 9:00 p.m. on August 19 before he lost it from sight, not knowing whether the object crashed or not.

Nearly two and a half hours after the San Miguel incident, Mrs. Saturnina Castillo reported from Xilitla that an object resembling a fireball had impacted a tree in a property located near the Montoya metal shop, owned by her husband Juan Montoya, adding that the tree had caught fire.

Joaquín Hernández was a direct witness to the sighting. He and his family prepare zacahuil and live next to where the object hit the ground. In fact, Hernández was preparing the zacahuil batter and he saw the fireball as it came down over the tree. Afraid that no one would believe him, he screamed for Juan Montoya and his wife to witness the tree bough catching fire.

He added that it was a highly unusual thing to see, as there was no thunder or storm activity that could lead anyone to think it had been a stroke of lightning.

The incident was reported to the Municipal Civil Protection unit, but no investigation was conducted.

A different version of this event is a little more interesting:

Rumors quickly swirled that Mexico’s highest military intelligence agency had an active interest in the case. What’s more, the encounter would offer similarities to one of Mexico’s most famous UFO incidents, as well as links to one of the most active UFO hotspots on the planet.

An interestin part of this, is that these strange events also share connections to the Chihuahuan Desert, which stretches from central Mexico right the way into the United States.

It is essentially the same stretch of sand that played host to the most famous UFO incident of them all, the RoswellRoswell Crash.

Shortly after 4:00 a.m., a glowing orange fireball appeared over Xlilitla. Those who were already awake would witness the bizarre ball of light take strange turns. Meteors don't turn, the object was seemingly under intelligent control, the object crashed into a nearby woodland, bouncing off several of the coffee and lemon trees. Flames and sparks of red, orange glowing material shot in all directions in a loud explosion.

Within 30 minutes, following frantic calls to the police of the incident, the area would be under lockdown. Residents were told to remain inside their homes. Those already at the scene were encouraged to go inside.

No solid object was found, but several of the witnesses would report finding strange, long pieces of ash around the area. This ash, however, had a hard quality to it. It wouldn’t simply crumble upon touch. Police had taken the majority of this ash with them following their sealing off the site, they would report nothing more of the encounter. When residents would make inquiries, they were effectively ignored.

When researchers would later investigate the events, several interesting points from the local populations would come to light. In the immediate hour following the crash, all police communications were down, all radio communications were down. These investigators would speak to an intelligence officer from the Central Police Intelligence Bureau. He would do so, however, anonymously such was the fear both the local population and the officers themselves had of the bureau.

The officer would state that numerous ongoing reports came in that evening of something in the skies above Mexico. He would eventually write his report, and file it with the SDN, Mexican military intelligence. However, following his submission, the report vanished, as did the majority of the strange ash found at the site.

Investigaors and Researchers theorized the ash like substance could be the result of intense heat and a huge electrical pulse fusing together wiring and metal. The electrical pulse, if it did occur, would also have contributed to the communications problems immediately following the explosion.

The previous evening, only hours before the explosion in Xilitla, were reports of a silvery object streaking across the skies over Valles. Several people witnessed the apparent object. And the closer it appeared to Xilitla, the more reports would state it to be an orange, glowing fireball. Much like the one that would eventually crash in the town.

Whatever the object was, it had arrived at Xilitla via a strange part of Mexico known as the Zone of Silence. This patch of land sits within the Chihuahuan Desert. According to radar analysis, it was over this stretch of land that the Xilitla object suddenly made its second sudden turn, taking it towards the small town.

As well as many UFO sightings and reports of strange lights, the area has a long history of other strange phenomena. In many ways, it is perhaps similar to the events that take place at Skinwalker Ranch.

Compasses will spin completely out of control here. Planes report severe malfunctions with their navigation equipment. Also, radio and television signals don’t work in this region.

The area would have the international spotlight placed on it when the U.S. military launched an Athena missile as part of a research mission in 1970. The launch took place from Utah, but went off course, eventually coming down in the Zone. According to reports, the U.S. military would come to investigate. And after sealing the area off completely and building makeshift rail lines to transport heavy cargo all the way into Texas, would spend almost a month there. All they would say is the retrieval was for wreckage parts.

Many people often become disorientated and ultimately lost in the zone. According to UFO researchers, people who have experienced this often state that tall, blond beings appear out of nowhere. These beings apparently ask for nothing in return, aside from a drink of water. Many people have made statements that these angelic entities leave no footprints on the ground when they have left. On occasion, when people have asked where they are from, the only answer given is: Above. Many in UFO circles know these apparent extra terrestrials as the Nordics.

Multiple reports also surface in this region of people seeing strange lights in the sky. At the same time, they also realize they have lost several hours with no memory of the time. This would indicate abduction, or certainly some kind of interaction.

Many abandoned mines also exist within the Zone of Silence, as well as cave systems largely undisturbed. Whether it is aliens from above, geomagnetic anomalies, or forces unknown, the stretch of desert is one of the most mysterious terrains in the world. This area, and the incidents in 2007, also share connections to perhaps the most famous UFO incident in Mexico’s history, An incident that would see both the Mexican and U.S. militaries race to the scene of an apparent UFO crash.

On August 25, 1974 along Mexico’s border with Texas, a large disk like object entered North American airspace. It would make a sudden turn at the Texas coast, heading south, before making a second sudden turn, taking it over the Mexican mainland. Shortly after, somewhere over the Chihuahuan Desert, it would collide with a small aircraft traveling south from El Paso, Texas.

Both the Mexican and United States militaries were aware of the objects, though not the specifics. The United States, while listening to the Mexican search efforts, suddenly heard the pilot state he could see a gleaming disk, with some signs of superficial damage but still in one piece.

Now both countries sent units to the region, racing against the other, looking to retrieve whatever wreckage was there. The American recovery unit was essentially CIA run. With almost 30 years of experience in such matters behind them, they could mobilize amazingly quickly, and from almost anywhere.

Many researchers believe that the CIA would have likely used their influence with high ranking officials in Mexican intelligence services to arrange a switchover of sorts. Many incidents had occurred that way in the past, with Mexican units searching the scenes first, before handing it over to the Americans once they had taken what they wished. Just one of these incidents was the previously mentioned Athena missile incident.

The Mexican unit would have the advantage, and they would arrive near the object first. All the while U.S. spy planes circled, reporting on the movements on the ground. Initially, the reports were as expected. Suddenly though, it began to appear as though the Mexican units were not moving. Further investigation would prove they weren’t. Something unknown had stopped them in their tracks. Furthermore, all the unit was dead.

It is not fully known the conversations that took place between the Mexican and American intelligence services, but shortly after the discovery, four specially prepared helicopters were on their way to the site. Initial intelligence would suggest the soldiers were the victims of a hazardous chemical leak, or if indeed the object was an extra terrestrial craft, some kind of unknown virus.

They would retrieve whatever of the craft they could, before leaving the area. Whether each member of the Mexican unit was dead or dying at that time is unknown. Before leaving the area, however, the U.S. units set off an intensely powerful explosion, incinerating anything left at the site. Official reports suggest the bodies of the unit were recovered and handed to the Mexican authorities.