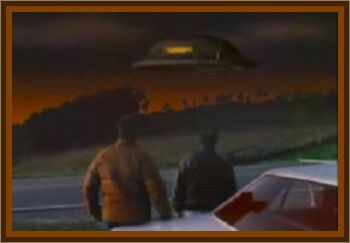 Wytheville, Virginia, is a small town nestled in the foothills of the Blue Ridge Mountains. Country music station WYVE calls itself the voice of Wytheville. On most days, life there is usually quiet and uneventful. But that was not the case on the morning of October 7, 1987. Radio reporter Danny Gordon checked in, as usual, with the county sheriff and heard an unbelievable tale. According to Danny, three Wythe County sheriff’s deputies all claimed to have seen a UFO:

It was a filler piece that came on at the end of the news which I usually relegate to something that’s may be unusual, like we had one police officer who killed five chickens at once with two shots, and that was a story that ran as kind of a Ha Ha piece, and this was another Ha Ha piece and being a very skeptical newsman, it was definitely not in my lead part of my news.

However, Danny’s Ha Ha piece sparked some unbelievable listener responses. Reports of UFO sightings poured into WYVE. With the switchboard jammed, Danny set up a special call in program for the following week:

Being a brass tacks journalist, I always believe there is a plausible, logical explanation. And I felt at that time that it was military of some nature and that we would find the reason in a short period of time.

Danny thought the UFOs were most likely experimental aircraft being tested out of Virginia’s Langley Air Force Base. But he was repeatedly told by the military that there was no testing going on. As more and more residents came forward with their stories of UFOs, the military finally came up with one explanation. They said the cause for the UFO sightings was not experimental aircraft but rather planes refueling. But according to Danny Gordon, that explanation was impossible:

I called the Pentagon and talked to the Air Force General there, who told me if they’re refueling under 13,000', then somebody’s butt’s in a sling. And to this day, we don’t know if they were refueling at 5,000'. But at the same time, I have asked, if it is military, then I’ll back off the story and leave it alone if you tell me because I’m a patriot. And each time I’m told it’s not us, we’re not doing it, and we haven’t been doing it.

On October 21st, just two weeks after the first sighting, Danny and his friend, Roger Hall, drove to the area where most of the sightings had occurred. According to Danny, they brought along a 35mm still camera, as well as a video camera:

We were headed home, after two hours of fruitless searching. And I just happened to look to my left and saw a very unusual object coming across the horizon. I pulled off to the side of the road in a hurry, jumped out, he got out of the right side, and as he got out I noticed the craft coming at me was very large, it had a dome shape to the top of it, and no wings, and had what appeared to be a strobe putting out multi colored lights on the right side of the craft. As I watched the sky, from the left came the red ball. As the big mothership went into a small skiff of clouds, the red ball docked with the craft. We looked at each other and realized, no pictures. The camera was not in my hand, the camera was not in his hand, and we both knew we blew it.

The next night, Gordon and Hall went out again. This time they did take photographs. With the film still undeveloped, Danny called a press conference for the following day, October 23, 1987:

The night before the press conference, I received a phone call from somebody who refused to identify himself, and he said that I need to be aware that the CIA and the federal government were very much interested in the Wythe County UFOs. I started to wonder what I’d stepped into. And my wife was urging me to back off, to leave it alone, and I was receiving some anonymous phone calls saying: it’s not for your place to be messing in defense matters.

After the press conference, Danny discovered that his house had been broken into. Although nothing was stolen, Danny was convinced that someone was looking for his photographs. When developed, the pictures revealed only vague streaks of light in the sky. But six weeks later, Danny had another opportunity to photograph the UFOs. He was out shopping with his wife and daughter when they encountered some unexpected visitors:

We looked very quickly and saw, what I thought was one large object, which later appeared to be four flying disk shapes. As soon as the objects were photographed they disappeared from view. When the pictures came out, they showed four definite shapes of objects in the sky, but the most impressive point in the four photographs, the objects appeared to change shape or life formations within one click of the camera. They go from a teardrop shape, to a round ball shape, then they go to a flying saucer like dis shape, and then they go to a egg shape as they go out of sight.

The people of Wytheville knew that something extraordinary was happening in their small town. Within a three month period, there had been more than 1500 sightings. One of the first occurred near Interstate 81, a mile from downtown Wytheville. Eyewitnesses said the craft resembled a brightly lit, spinning carousel. Immediately, other sightings were reported. One local resident, Patricia Aker, experienced a total of ten UFO sightings:

I’m not mistaken about what we saw. Absolutely not. Because we’d never seen this before. The best way I can describe them is that they sort of looked like a cross between a helicopter and an airplane, with no noise.

Then there was Mary Jane Williamson’s sighting, which happened directly above her house in the center of Wytheville:

It had all the white lights, in the front, just a big semi circle of white light, and it was just huge, I mean, it was just absolutely huge. You just had this feeling of something really, really big, just moving, just drifting over your head and no sounds or anything.

Three months after the initial wave of sightings, Danny was packing for a broadcasters conference in Virginia Beach. It was there that he was to speak about his UFO coverage:

I received a phone call at home from a retired military intelligence officer, and first he told me to make sure that I taped the conversation so he could put the date, and everyone to be aware, and I said, why do you want to tape this? And he said: I want your friends to know, that if something happens to you, that I forewarned you. He told me that because of his investigations into the UFO field that they had hit his son and caused his son to die with some kind of virus connected to leukemia. He said that he had information that the federal government was not very happy with my UFO investigations… he said, they want to quiet you…

Less than one month after the disturbing phone call, Danny had two surprise visitors at his home. The two suited men said they were newspaper reporters and stayed for approximately 45 minutes. According to Danny, one of the men interviewed him while the other roamed through the house snapping photographs:

They told me when they left they would send me a copy of the article so I could peruse it, and when I didn’t get one I called the newspaper and they said, well, these two guys are not on our payroll. They don’t work for us. So who they were I don’t know, but they were in my house, saw my pictures, saw my negatives, talked to my family, took pictures and then left but they were not with the newspaper.

few weeks later, Danny sat down to organize and catalogue his UFO photographs:

When I got to the canister which had the UFO negatives, I quickly opened it up and found some UFO negatives, but the one negative with the shots from the shopping mall was missing. Now I felt like maybe there was something in those photographs that I was not seeing, so I took the photographs to some other people to look at. We used magnifying glasses and we measured angles trying to find out why these photographs were so important. And we’ve yet to discover why anyone would want to steal that set of four in a series of photographs of the UFOs.

Two months later, the stress of the late night phone calls, the home break in, the strange visitors and now the missing negatives finally took its toll on Danny and he had a heart attack. Doctors later determined that the attack was brought on by severe exhaustion. Danny was warned that continued involvement with the UFO controversy could kill him:

If I had my choice, I’d not report the UFO story again. It’s just been too hard on my life and created too many problems. Don’t look up. Because once you look up and you tell somebody what you saw, your life is changed forever.

Danny Gordon says that today, Wytheville has moved on from its days as a UFO town and is now enjoying its booming arts and business communities. But if history is any indicator, sometime soon, in another small town, someone else will look up and his or her life will never be the same.