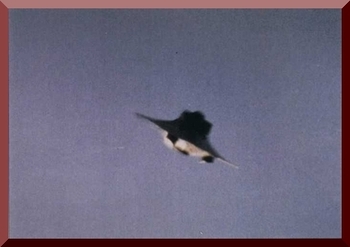 I am writing this report for my grandfather who passed away in 2004.

During his childhood he grew up in a hamlet called Sarnesfield, Herefordshire before he moved to Saint John, Canada aged 22 in 1953.

As a child during the war he and his friends used to work on the fields surrounding the hamlet, operating simple farmyard machinery.

One summer afternoon during the latter half of the war he and a few friends were returning to the fields after having lunch when they all saw a small saucer over some nearby fields.

When telling me about what he saw he always said it was drab green, had a domed glass canopy on the top of the saucer and had two large black circular vents on the beneath of the saucer.

He said it was like no plane he had ever seen as it was much bigger than anything of that time.

Immediately, my grandfather and his friends ran back to a barn and stayed in there until they were sure the saucer had gone.

For many years he thought it must have been a new German bomber, as he had never seen a German plane in the war at all, as he was in such a remote location. It was not until he moved to Canada in the early 1950s and UFO hysteria gripped North America that he believed what he had seen was a spaceship.

I am entirely confident that my Grandfather saw what he claimed to have seen as he was a very honest man and was a policeman for 18 years.