Reported in a London Paper #2 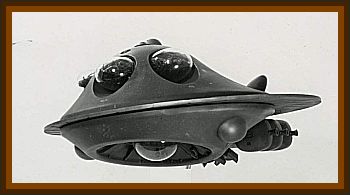 I have always heard that UFO sightings date back to the end of WWII, but I know about one that was witnessed by my own grandfather and 9 year old uncle in 1942.

The place was Montagny, a small village in the center of France.

Time of the year: Autumn, the day before the Allies landed in North Africa.

It happened at night. My grandfather and uncle had gone out to a farm to buy potatoes, in spite of the curfew, imposed by occupying Germany.

They were in a hollow, empty, lane, in the dark, when suddenly a thing, saucer shaped, with a window, like in a train compartment, started next to them from behind a hedge.

The thing hovered there for a moment, then went away at a tremendous speed, without making any noise. Planes were so noisy then that they made the ground shake, when there were a lot of them at a time.

You can imagine their fright. My grandfather died in 1975, but he still trembled and shook when he told that story. My uncle died a year ago, and he hated talking about it.

It is absolutely out of the question that my grandfather invented that story. Also, he told the family immediately, well before people started talking of UFOs.

He told the story to a distant cousin, who had been a colonel in the French army, but apart from that, the story has never been outside the family. My grandfather would not have liked any publicity about it.

As he said, it could not be something immaterial because it made some dead leaves swirl on the ground.

It could not be a hallucination because they both saw the same thing.

Was it something human made?

Maybe, but I have yet to see a saucer like plane that moves without making a noise.

I don’t think many people saw that thing, because there weren’t many people wandering outside at night in Nazi occupied France in 1942.

But if you heard about similar sightings, I’d like to know, too.