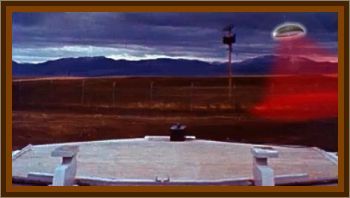 Wurtsmith AFB, located 2 miles west of Oscoda, Michigan, had its beginning in 1923 as a landing area for Army airplanes from Selfridge Field near Detroit. In 1953, it was formally named for Michigan's World War II hero, Major General Paul B. Wurtsmith, who died in an aircraft accident.

Wurtsmith encompasses some 5,200 acres of land and had about 3,500 people assigned. It was formally closed in June, 1993, and all nuclear weapons were removed.

At 10:10 p.m. persons in the base family housing area in the southeast part of Wurtsmith began seeing a low flying aircraft that they thought was a helicopter. It had running lights and it hovered and moved up and down in an erratic fashion. An airman guarding the Capehart housing area gate observed an object with one white searchlight and two red lights at the rear. It was heading in a west southwest direction. Another airman, on duty at the motor pool, saw lights near the western perimeter of the base. Sergeant Robert J. Anderson, also on duty at the motor pool, saw a KC-135 tanker and below the tanker he saw an unknown craft with a steady red light. Sounds similar to that of a helicopter were heard intermittently by observers.

Fifteen minutes later, at 10:25 p.m. Security policemen at the back gate of Wurtsmith reported to their command post that they had observed an unidentified helicopter with no lights. The craft had hovered over the weapons storage area at low altitude. The craft moved towards the north, and when it reached the northern perimeter, it turned on its lights. Guards inside the weapons storage area reported seeing the craft and hearing a sound similar to that made by a helicopter.

Then at 10:30 p.m. Radar Approach Control reported tracking low flying objects on radar. They tracked a return as it flew a distance of 35 miles southeast of Wurtsmith. No visual sighting was made by tower personnel, and no attempt was made to contact the unknown craft by radio. At that point, a KC-135 tanker returned to Wurtsmith from a refueling mission. The Wing Commander, Colonel Boardman, ordered the KC-135 to try to intercept and identify the craft. The tanker was vectored in by Radar Approach Control.

Captain Myron Taylor, a navigation instructor who was on board the KC-135, later reported in a statement to 379th Bomb Wing Historian Staff Sergeant Paul J. Cahill, that:

I remember seeing lights similar to strobe lights which were flashing irregularly. We followed the lights north out over Lake Huron and then the UFO swung south.

After observing the lights we determined that there were in fact two objects and the irregular flashing appeared to be some sort of signal being passed from one to the other in an effort to maintain the same position. I would estimate that our altitude was about 2,000' and our speed approximately 200 knots.

I would guess that we stayed close to the UFO most of the time, approximately one mile away, and each time we attempted to close on the object it would speed away from us. We followed the UFO down to Saginaw Bay and started across the Bay when we lost it because of all the fishing boat lights.

We continued in the direction of the Bay until RAPCON, radar, called us again and said they were painting a UFO four to five miles over the coast traveling in a westerly direction. They vectored us to the position of the UFO and we proceeded but at point we were low fuel and were forced to return to Wurtsmith. I remember that while on final approach we saw the lights again near the Weapons Storage Area.

Following the mission we discussed the incident and about a week later, Captain Higgenbotham was questioned by OSI and cautioned not to discuss the incident.

A report was made to NORAD. The extract from the NORAD Command Director's Log reads:

The local police and the Saginaw, Michigan FBI office were notified, with no results.

All possible air traffic in the area was investigated, but none explained the UFO.

Since the Michigan Department of Natural Resources sometimes sent out helicopters to catch hunters spotlighting deer in nearby Huron National Forest, they were contacted. They had no aircraft in the air at the time.