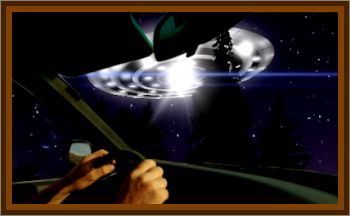 Terry and a friend, Bob, had decided to pack up their camp because of an approaching thunderstorm. The two men had been camping in the area of Wrotham Park Station and hunting crocodiles to be sold in Cairns. The two departed in Bob’s four wheel drive Landrover towards the station homestead on route to Chillagoe with the idea in mind of leaving the area before the roads became boggy.

Upon reaching the gate at the homestead Terry and Bob saw a light some distance from the road in the scrub, at a second gate another light was seen. Not considering these lights as anything unusual, the two drove towards Chillagoe and after driving for another 10 minutes, Bob saw and pointed out a light in the sky, approximately 100' altitude and half a mile ahead. The object, which the light was on, paced the Landrover in front of them at this distance for approximately one hour until approximately 2:00 a.m.

The Landrover seemed to gain on the object until it almost stopped one quarter of a mile distant. Terry stated that it was hard to estimate the distance because of the darkness. The UFO drifted across the road and over the scrub to their left and the two men decided to stop and look closer at the object at this stage. They hooked a spotlight on the Landrover and aimed it at the object. Terry said they flashed the spotlight several times and the object, hovering appeared to respond by dimming and brightening on top. During this time watching the object, Bob approached the UFO on foot to about 90'. He described an object about 60' wide and 25' deep with a large window area, lit with soft green light inside and a brilliant curtain of crimson light streaming down from the rim of the object to the ground. The object was a gold brown in color at this time but later appeared to be shiny metallic when lit by sunlight. The whole UFO was enveloped in a halo of light apparently reflected up from the crimson beams.

Bob stated that although he could not hear any noise, he had the impression that a lot of noise was being generated, perhaps beyond his range of hearing. As he stood watching he saw several shadows moving in the cabin area, one of the shadows moved to the windows of the object nearest to the witness. He clearly saw the upper human form silhouette apparently leaning on the window sill area looking out. Bob decided to return to the Landrover at this stage.

Terry & Bob continued to observe the object until sunrise, when the object began to slowly move away to the northeast.