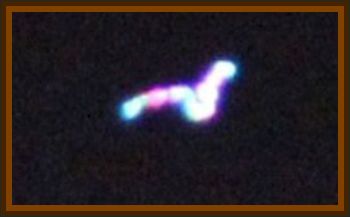 My boyfriend and I were talking, sitting on beach, there were no stars in the sky at first, there were a few families still.

Later the clouds cleared and stars came out in one little patch over the ocean. Looking more closely, we noticed one first blinking different colors and moving slightly left and right over the ocean.

Then looking around we realized none of them were stars, they were all moving slowly and blinking slightly. Some of them were moving towards the clouds, towards Wilmington.

We very vaguely thought we saw stuff coming from them.

And some of the lights were moving at the same direction and pace making one look like one huge shape. There were also flashes in the sky, which we thought were originally heat lighting. after admiring the sky for about 25 minutes, we were the only ones on the beach, we looked down the beach and there were 3 lights at level coming down the beach.

It looked like someone running with 3 flashlights just scanning the shoreline down the beach, except there was nothing holding them up we could see. We just looked down the beach and they started out of nowhere.

Just coming way to smoothly and quickly for 3 people to be holding flashlights. I got scared and started to head off the beach, the lights started coming down the beach faster, so I ran.

One light starting to shoot off in our direction and we were sprinting for the parking lot. Running towards the board walk we heard just extrremely loud chirping in the dunes, sounded like crickets, just so loud and intense. I ran as fast as I could towards the parking lot and the whole way running down the boardwalk the chirping just got louder and more intense, it was so loud.

When I finally hit the parking lot and I got to my car, there was one man on a phone sitting in the parking lot but there was no chirping anymore and when we looked up at the sky all the stars were gone. Not one star in the sky.

When we got home we noticed just one in the sky, just floating, which we saw hours later still in the same spot. this was my first experience ever seeing anything like this.

I have no idea what was on the beach, literally on land. but all the little lights in the sky were mostly over the ocean and there were so many of them.