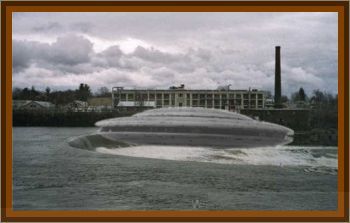 A father and son went to a movie in 1957, the movie was "Earth vs. the Flying Saucers", a science fiction classic. As the two drove home after the show, the man's father was much quieter than usual. To the son's surprise, his father suddenly said, "They were too big." Naturally, he asked his father to elaborate on his enigmatic statement.

His father opened up to him, telling him that 10 years earlier, in 1947, while stationed at Wright Field, now Wright-Patterson, in Dayton, Ohio, he was part of a military film crew. They never knew when or where they would be sent. One day an officer came to him, and instructed him to get several 16mm movie cameras, and follow him. He was taken to a heavily guarded hangar on the base. This hangar could have been the storage facility for the aliens from the Roswell Crash.

Entering the hangar, he was amazed to see a circular aircraft of some type. It had obviously crashed or been shot down. Bits and pieces of it were scattered over a large canvas tarp. The man, along with another cameraman, was told to film literally every single piece of debris along with the craft. They did as they were instructed.

This would not be the only shock of the day for the man and his fellow cameraman. After discharging their duties at the hangar, they were taken to the very back of it where sat a refrigeration unit. Entering the unit, they saw what they described as a case you would find in a museum. Inside were two small gray creatures unlike anything he had ever seen or imagined.

The small bodies were extremely frail looking with large eyes without lids. One of the bodies had suffered terrible injuries, but the other had none. The two cameramen were again instructed to film the entire scene. They two were taken back when the case was opened, they were almost overcome with the terrible odor of dead fish.

Normally, when the cameramen finished an assignment, they took their film to the lab to get it processed. This would not be the case this time, all of their film was confiscated. Both of the cameramen would be debriefed, and sworn to secrecy as to what they had seen. The cameraman's son was only told the story one time. His father was a religious man, and very patriotic, and certainly would never make up such a story. He made his son promise to never reveal the story to anyone. Only after his father's death, did he feel free to relate the event to others.