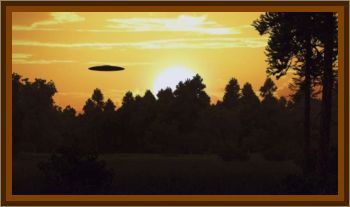 This was one of many occassions when myself and family members and neighbors saw similar objects, always heading in the same direction, always landing at the same sight.

The variances were that:

On some occassions the craft would appear and travel at an extremely fast speed and then halt suddenly, but smoothly and descend slowly.

On other occassions the craft would hover and eminate a bright light and land.

Some sightings lasted a matter of 10 seconds, others for several minutes.

Our house was approximately 1 mile from the landing site, and from this distance, it looked as though the craft were 12' in diameter and 10' high and 40' round. The saucer had a spinning motion. I did not see any windows on any of the craft.

Why we"have believed these were UFO is because of the movement/action of the craft, the sudden take off, the hovering etc were not possible by helicopters, aeroplanes, falling stars or meteorites.

The craft always descended in the same area.

Interestingly, we have later learned that there a series of markings in caves similar to heiroglyphs. And there are two other areas with similar markings and when plotted on a map, form the shape of a pyramid.