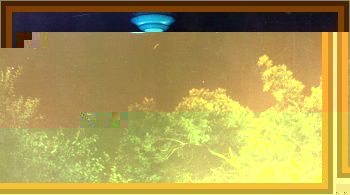 It's been such a long time ago, but its still very clear in my mind but the date may be wrong, it could be 1972. I lived on Lamleys Lane, Worthing, Sussex, England. I had been married the year before, the cottage we lived in was the last house on the Lane going north up the hill, next to the barns and tractor sheds.

That night my first husband and I retired about 10:00 p.m. After being in bed about 10 minutes I could hear a humming noise, I thought it was our electric kettle, maybe I left it on. I went down stairs into the kitchen, No it was not the kettle it was unplugged.

Still hearing the hum I searched for it's where abouts I pulled the bedroom curtains open to check outside the house. There it was as plain as day, I could not belive my eyes. A space ship. Oval in appearence with flashing lights around the middle they were white, and the craft was spinning. This is where the humming was coming from. It was stationary above the hill in front of me.

I called my husband to come and look because he was a none believer. We watched it for about 15 minutes then it began to move, it went to the right, then to the left and was gone in a flash.

About 5 seconds later 2 military aircraft flew right over the position where I had seen and heared the spacecraft.

I have told a few people about my experience those that were close to me because people would think I was nuts or lying.

This happened it has stayed in my mind all these years and the sound, it's an experience you never forget.

I believe now this was not aliens, its our future coming back for some unkown reason. Why did they not want to be caught? Because it would change the future.