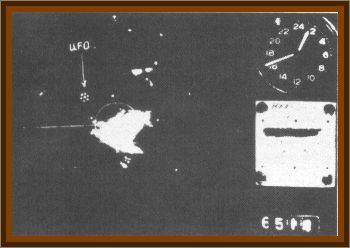 Navy pilot Lt. J.G. George G. Morgan of Lakehurst NAS, police chief, or captain, Richard Clement, police officer Oliver G. Osborne and other officers, and 20+ other witnesses, saw 3 to 12 round or oval white objects with fuzzy edges slightly smaller than full moon angular size hovering in the sky to the S for 90 minutes as 2 objects circled around one, in 2 to 4 seconds, seen to the ESE from Woodbury, SW from Surf City at high elevation, then switched places with each other.

Some witnesses, such as Mrs. Worthington & son Norton in Woodbury, attempted to drive towards the objects to investigate. Objects suddenly departed to the SW at extremely high speed growing smaller until disappearance in 1 to 2 seconds covering about 60º of sky.

Multiple independent witnesses across a baseline of at least 12 miles resulted in triangulation near Beach Haven, NJ, from distances of about 15 to 40 miles. At least 5 witnesses used binoculars including 7 x 50 Bausch & Lomb. Hynek calculated speed of 90,000 mph, hovering altitude 4 miles, object diameter 1,500'

The Report to Blue Book by J.R. Gluck states that the longest time anyone saw the objects from Toms River was 90 minutes, and this was the time given by the police chief as his total time.

The Project 10073 record card gives the length of observation as 20 to 30 minutes. The evaluation given by Project Blue Book for this sighting was searchlight activity, although according to J.R. Gluck's report the night was perfectly clear and starry with no clouds whatsoever.