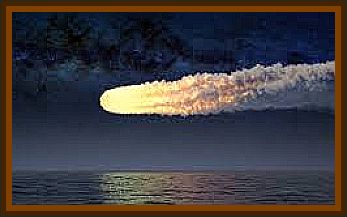 During 1973 I worked at the USAF base at Bentwaters in Suffolk, England. I was travelling home with a friend who was in the Air Force and we saw a bright yellow fireball behind some trees in the Tunstall Forest, east of the base.

Thinking a plane had crashed, we drove around for about 15 minutes on forest roads and never located anything.

Nothing was published on the fireball we saw and no planes reported missing. This might just have been one of those unexplained mysteries, except that there were always those kind of mysteries around this area and this was 7 years before the now infamous Bentwaters incident.

I was born and grew up in this area, and as child in the 1960s regularly saw things that I realize could not be explained away now, as they were then. If I asked an adult then, it was always explained away as:

They must be testing something at the base.

But never as the Orford Ness Lighthouse as some have tried to explain the 1980 incident. Anyone living there knew those lights and what they were.

Bentwaters closed abruptly in the mid 1980s and local speculation is that it was to do with the incidences that occurred there during the 1970s and especially in 1980 and 1981. There has always been local talk of tunnels from Bentwaters to Woodbridge and other talk of secret testing that went on at the base and at nearby Martlesheam Heath, an English base during WWII and now a Governement run installation.

Another writer proclaims the military never messes around when it comes to nukes. Not really true, when one considers that in the 1960s and 1970s, Bentwaters was proclaimed as not having nukes and all the while kept a very low profile, while Greenham Common was busy with anti nuke protestors.

Lakenheath was considered the headquarters USAF base in England and yet had no real mission, at least at that time, yet their security was very tight.

Meanwhile on Bentwaters, I as a civilian had my father drive me to the flight line to meet a friend who worked out there surrounded by nukes. He pointed them out to us. We could have easily have been someone other than who we were, which is a frightening thought in retrospect. The security in and around Bentwaters was lacking and lots of people did come and go, virtually unchallenged, unless an alert was in force.

What really happened there, we may never know, but I suspect there are lot of people who have come and gone from service at Bentwaters who have small bits of the puzzle and one day all those bits may just slot together and produce the finished jigsaw.