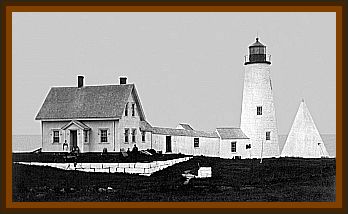 One of the best known Maine lighthouse legends involves a true story about a murder/suicide at Wood Island lighthouse from an altercation between a lobster fisherman, who was also a local sheriff living peacefully on the island, and a drunken resident who shot him, then shot himself.

Keeper Thomas Orcutt was stationed at Wood Island lighthouse at the time when Frederick Milliken was a lobster fisherman and part time sheriff at Biddeford Pool near Biddeford in Maine. He lived on Wood Island with his wife and three children and was a rather large peaceful man in his 30s, known as the town's gentle giant.

Two men who were drifters and part time fisherman, Howard Hobbs & William Moses, persuaded Milliken to rent his chicken coop shack nearby for them to stay for a brief period. Both men had quite a drinking problem and over the next few months had not paid their rent to Milliken.

One summer day in June of 1896, Hobbs and Moses returned to the island from a session of heavy drinking on the mainland. Milliken found his neighbors wandering drunk on the island and told them to meet him at his house to discuss the issue about the overdue rent. Both men came to his house with Hobbs carrying a rifle in his arms and started arguing with Milliken, presumably about the overdue rent.

Milliken tried to persuade Hobbs to hand over the weapon, but Hobbs claimed that his gun was not loaded as he waived it around. As Milliken reached to take it away, the gun fired and shot Milliken in the abdomen. Milliken's wife, who was nearby, witnessed the event in horror, along with Hobbs' friend Moses. As the two carried Milliken to his house, Hobbs followed apologizing, still holding the gun in his arms.

Still in a drunken daze, Hobbs ran off to the nearby keeper's dwelling at Wood Island Lighthouse to get help from Keeper Orcutt, still carrying the rifle. The wound proved fatal and Milliken died less than an hour later. Keeper Thomas Orcutt then advised Hobbs to give himself up to the authorities. Hobbs instead announced that he had one bullet left, which he intended to use on himself, ran off to his shack, and shot himself in the head.

Since the incident, many strange events have been reported over the years at Wood Island. Many believe both the ghosts of Hobbs and Milliken haunt Wood Island Lighthouse. Moans are still heard coming from the chicken coop shack, and locked doors have been mysteriously opened at the lighthouse. Dark shadows have been observed near the lighthouse walkway, at the top of the tower, and strange voices have also been heard. There have also been sightings of a woman, believed to be Milliken's wife.

In 1905, Keeper Charles Burke, stationed after Orcutt, was so distraught believing he was seeing and hearing ghosts, that he left his post at Wood Island lighthouse unattended and stayed overnight in a boarding house on the mainland. The next day, he jumped from a window on the third floor to his death.

In the fall of 2005, the New England Ghost Project, a paranormal research team was invited to investigate the island and lighthouse area. Shadowy figures were observed and recorded near the lighthouse and walkway. A medium was brought in and the spirit, believed to be Hobbs, was apologizing through the medium's trance. Another spirit, believed to be Milliken, made her feel as if he were severely injured and trying to get away from something.