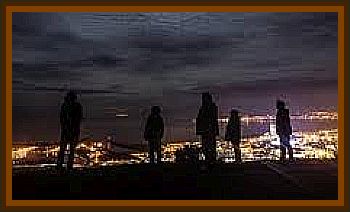 There have been many documented encounters of UFOs and their occupants throughout history.

Many of these documented, multiple sightings involve very credible multiple witnesses such as military officials, police officers, astronauts and yes, even several Presidents of the United States.

Encounters are of the first, second and third kind.

Second kind encounters involve trace evidence left behind by the vehicle and/or the occupants.

Many of the so called sightings have been later found to be hoaxes. There is a great deal of misinformation and disinformation that has been deliberately spread in our media and on the internet by the U.S. government and various sources.

No one ever wants to admit they simply don't know or have no explanation, this includes the U.S. government.

I personally don't believe they are malicious in their intent to misinform, they simply aren't prepared for wide scale panic and confusion as a result of their admission of the truth. Be that as it may, lets move on to more verifiable sightings.

Encounters of the first kind are what we most associate with alien activity.

Sightings involve being plotted on radar, unexplainable lights in the sky, on the ground and even on the moon, craft of some kind sighted in the air, on land and in the ocean.

It has been suggested that these craft are hiding themselves deep within our oceans to avoid detection.

I don't laugh at people any more when they say they've seen UFOs. I've seen one myself - Jimmy Carter on the campaign trail in 1976.

During an interview with Norman C. Miller the then Washington D.C. bureau chief for the Wall Street Journal, Ronald Reagan describes his 1974 encounter with a UFO:

I looked out the window and saw this white light. It was zigzagging around. I went up to the pilot and said:

He was shocked and he said:

And I said to him:

We followed it for several minutes. It was a bright white light. We followed it to Bakersfield, and all of a sudden to our utter amazement it went straight up into the heavens. When I got off the plane I told Nancy all about it.

It is also interesting to note here that President Richard M. Nixon after his election didn't deny the existence of UFO's, he simply stated to the press:

I'm not at liberty to discuss the government's knowledge of extraterrestrial UFO's at this time. I am still personally being briefed on the subject.

Other well documented cases include the Phoenix Lights caught on video and photographed by multiple witnesses including multiple radar sightings and those who witnessed these events claim that the Air Force scrambled fighter jets. The U.S. government has failed to give an explanation for the USAF presence.

These lights were sighted from Casa Grande to Prescott, AZ. It later made front page news in USA Today, titled:

Arizonans say the truth about UFO is out there" by reporter Richard Price. Included with this front page article was one of the many photos taken of the craft and their associated lights.

I'll never be the same, Bill Greiner, 51, a cement truck driver, says. He was hauling a load down a mountain north of Phoenix when he saw two brilliantly lit orbs, shaped like spinning tops.

Before this, if anybody'd told me they saw a UFO, I would've said:

Yeah, and I believe in the tooth fairy.

So what did Greiner and everybody else see?

That question has rattled around this state for three months.

Officials at Luke Air Force Base in nearby Glendale are bombarded with calls for an investigation, even though the U.S. government is officially out of the UFO business.

Great Britain's Ministry of Defence continues to periodically release files documenting UFO encounters available through the UK's National Archives. Of course, there is nothing substantial or even verifiable, just the multiple testimonies of those who experienced these encounters.

The Rendlesham Forest case is undoubtedly one of the best documented and most significant military encounters with a UFO. It is also very credible incident. The incident spanned four days in 1980.

Rendlesham Forest is a large pine forest, east of Ipswich, in Suffolk, England. Nearby are the twin NATO air bases, RAF Bentwaters and RAF Woodbridge; at the time both bases were being leased to the United States Air Force.

The object was described as being metallic in appearance and triangular in shape, about 2 to 3 meters across the base, it illuminated the entire forest with a white light, and had a pulsing red light on top and a bank(s) of blue lights underneath.

Encounters of the second kind leave tangible, trace evidence of their presence somewhere on the person involved in the encounter, on land or in the water.

These encounters usually go hand in hand with encounters of the first and third kind. The most famous second kind encounter was an incident that took place in Shag Harbor, Nova Scotia.

As many as 11 people saw an object which at the time was thought to have been an aircraft crash into the waters off the shores of Shag Harbor. The Canadian Navy and the U.S. Coast Guard responded to the report in which no physical debris or personnel were ever officially found, however a yellow foam like froth was recovered. In addition, no aircraft were ever reported missing in the area.

In a documentary called Canada's Roswell which aired on the History Channel, it was reported that divers from both the U.S. and Canadian Navy were dispatched to the area where they collected samples of the yellow foam like froth and took photographs of the unknown objects below. When they were subsequently called away to check on a Russian submarine that had entered allied waters to the north, the unknown objects that had been observed on the ocean floor departed.

Some close encounters of the second kind include these strange geometrical shapes carved into the fields around the world and are infamously known as crop circles. Crop circles have been associated with this kind of event because unknown lights and other mysterious, supernatural events have been observed at the same time.

I will not go into detail concerning this kind of encounter because, it has very little relevance to this discussion. Additionally, many crop circles have been found to be hoaxes.

Encounters of the third kind give us a more definite inkling into what their sinister plans seem to be. These third kind encounters are most always described as frightening, sexual, intrusive, experimental and/or informative. The information derived from these encounters never, ever points toward a loving God who created the universe. It almost always is more transcendental in the approach:

We have the power within us to be like a god or goddess. Does that sound familiar? Adam and Eve were brought down with that very same argument. Of these encounters, none seem to be more repugnant than that of the third kind.

Dr. Chuck Missler in his ministry attempts to put a biblical view on the whole UFO phenomenon. In Alien Encounters co-authored with Mark Eastman, they say:

A recurring theme in the abduction scenario is the delivery of detailed messages to abductees. The messages delivered to abductees are typically done by telepathic, mind to mind, conversation. In some cases, abductees report being shown scenes or messages on large screens within the alien craft. These messages are usually horrific prophetic scenarios about impending cataclysmic events on Earth and the destruction of Earth due to environmental degradation.

In some cases overt religious messages are given to abductees. These messages can include the notion that the aliens are our creators, that they are trying to advance our evolution through these breeding experiments, and that mankind must unify, with their assistance,into a system of global governance and religion in order to survive the future cataclysms.

Abduction cases often include medical and scientific experiments performed on those who have been abducted. Dr. Jacques Vallée, a former French astrologer, author, leading UFO researcher and a collaborator on the film Close Encounters of the Third Kind, has not gone on the record as saying UFO's are demonic in origin but he does affirm that abduction reports parallel medieval tales of demonic encounters.

He has reported on many of these cases and his description of such events seems to sum it all up,

The medical examination to which abductees are said to be subjected, often accompanied by sadistic sexual manipulation, is reminiscent of the medieval tales of encounters with demons.

It makes no sense in a sophisticated or technical framework:

Any intelligent being equipped with the scientific marvels that UFOs possess would be in a position to achieve any of these alleged scientific objectives in a shorter time and with fewer risks.