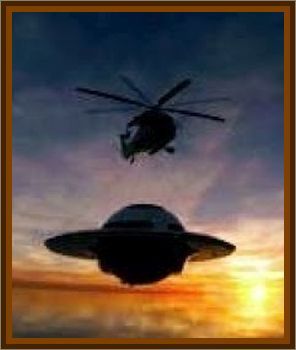 I witnessed a black unmarked helicopter first. then as if coming straight up behind a tree line was a large triangular shaped craft.

The large isosceles triangle had an equally shaped triangular opening in it's interior. I could see the sky through it's interior opening. It was metallic or chromed finished. It seemed to reflect the setting sun on it's surface.

The craft asended in a straight upward flight exposing its complte triangular shape. The metalic frame of the craft had what appeared to be 10 to 12 equally spaced thrusters on one side of the craft.

After a brief ascent it seemed to turn in a 90° angle, which I figured was upside down now that the thusters were on the top side. As it rolled into that 90° turn the craft took on a thin flat shape. With the thin edge I could barely see, I could not see its shape any longer as the craft turned stealth like or blended in with the blue sky.

The thin edge I could still see excellerated so fast to the east that the edge was thinning into nothing. The black helicopter was gone as well but I had completly forgotten about it. I immediately whipped into a conveinent store to see if anyone on the inside just witnessed what I had just seen, but no one seemed to be excited from any sighting so I kept it to myself.

My family still laughs at me today until today, Sunday Nov. 15th, when the Charlotte Observer,page 2A, a gentleman writes that his wife swears she has recently seen the same type of craft.