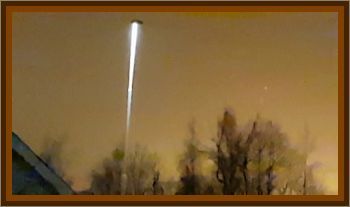 A Wisconsin couple was awakened by bright lights shining in through their bedroom windows around 9:00 p.m. The wife got up to investigate and saw a white yellow light that was so bright she couldn't look directly at it.

The light was hovering over the trees about 200' from their home. She and her husband watched as a search beam came from the large light.

They described how the search light rotated around the ground as though seeking something specific. The light turned toward their bedroom window. The couple ran outside to get a better look since they lived near an airport and had never witnessed anything like this. They were surprised there wasn't any sound coming from the object overhead and just as surprising, there was no air movement, such as what would come from propellers.

The light diminished some, and the couple was able to make out a disk shape that had a higher top area. Windows were positioned around the upper part of the craft, and they were able to see red lights inside it. They described this as those found in photographer dark rooms. As the light grew dimmer, the couple could distinguish five or six silhouettes of human shapes that were moving about inside the spacecraft. The underbelly of the craft was illuminated with yellow white light.